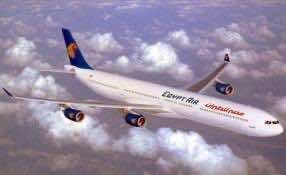 Britain’s Royal Air Force (RAF) on Saturday escorted an Egyptair plane bound for New York to a Scottish airport following an onboard incident, the Ministry of Defence said.

“Typhoon (aircraft) were called from RAF (base) Leuchars and a passenger aircraft was diverted following an incident on board,” said the ministry.

An eyewitness told the BBC that two jets escorted the passenger plane to Prestwick, where it landed at around 2.30 pm local time (1330GMT).

The Boeing 777 was travelling between Cairo and New York when a passenger alerted plane crew that she had found a note reading “I’ll set this plane on fire” in the toilet.

The message was scrawled in pencil on a napkin and was found by BBC New York producer Nada Tawfik.

Tawfik told the broadcaster that the note also pinpointed a seat number, adding “I can’t imagine this is just a prank”.

Police Scotland confirmed officers were responding to an ongoing situation while the airport issued a statement on its website saying it was “currently dealing with an incident”.

It added there was no disruption to scheduled flights.