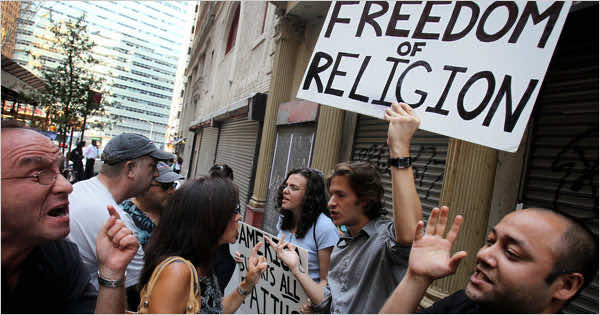 I happened to have witnessed a significant act of faith at JFK airport in the summer of nineteen seventy six. The date was also significant as the US then was celebrating the bicentennial of its independence and hopes for a better world were rather high. We were a number of exchange students waiting at an airport terminal to board a plane back to Portugal then to Morocco. All of a sudden, a middle-aged man dressed in traditional Moroccan clothes and holding a hand-woven pannier, stood erect in the middle of the terminal pavilion, set his pannier aside, raised his hands to the level of his ears and loudly started calling for prayer.

When he was through, I was amazed by the number and diversity of nationalities represented by the people who stood row after row behind him. He was to conduct the prayer session so, one of the call heeders volunteered to be his assistant and announced the ceremonial opening of the prayer. Now, prayer was in progress, and one could tell from the way those people were dressed that they belonged to at least some fifteen different nationalities and probably spoke as many different languages. Being a Muslim myself, I was torn between the duty of joining the prayer and the fear of missing my plane. Anyway, I watched with great admiration this anonymous figure who established himself Imam of so many people for so many minutes within but a short notice.

As this man concluded the prayer, the small community of Muslims who joined him got to their feet, shook hands with one another then each of them found his way among the crowds of people at the airport terminal. Each of them had a destination to attend to and a life to make somewhere in the wide world. The US then seemed to many people of the world as a haven for those seeking political and religious freedom and an Eldorado of great opportunities for the pursuit of happiness. About three decades later, the face of the world changed greatly.

A once powerful empire called the USSR collapsed, the Berlin wall shortly followed and the Warsaw pact got disbanded. The contours of a new world were taking shape with different attractive appellations such as the new world order and globalization. Great means were put at the service of this globalization to make its machine work. The world came to be qualified as a village community because of the powerful revolution made in the field of information and communication technology and its great impact on the lives of millions of people around the world. It was not until the year 2001 that the world woke up to a different and sorry reality.

The 9-11 events in New York brought in their wake great shadows of suspicion and mistrust of Muslims. The open and friendly scene I witnessed at JFK in the summer of 1976 will have a zero chance to occur again under the tight and complex security measures. Whether allowing that act of faith then was based on tolerance or simply on pure indifference, there will not be room for any of them nowadays.

Many people around the world do bitterly express their nostalgia for the old America where there was room for all to co-exist. Dialogue between civilizations and faiths has never been put on the back burner and forgotten than it is today. The voice of reason is very much weakened and almost stifled by the sounds of roaring war planes and canons that are trying night and day to have the last word in world issues.

From my idealism as a young man and my realism as a grown up I have come to forward the following: Conflicts are almost always of a thorny nature and trying to solve them by force creates a multiplier effect that makes them even worse. Listening to the voice of reason and resorting to peaceful ways of conflict resolution can create greater opportunities for a better life for all in this small, small world of ours.

Moroccan-Born Ihssane Leckey Runs for US Congress on Justice Platform