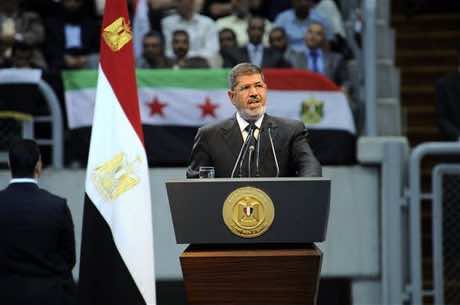 The Syrian government on Sunday condemned Egypt’s decision to cut ties with Damascus and back the armed uprising against President Bashar al-Assad, calling it an “irresponsible” move.

The official said Egyptian President Mohamed Morsi had joined the “conspiracy and incitement led by the United States and Israel against Syria by announcing the cutting of ties yesterday”.

“Syria is confident that this decision does not represent the will of the Egyptian people,” the official added, accusing Morsi of announcing the severing of ties to deflect attention from internal crises.

Morsi, an Islamist who hails from the Muslim Brotherhood, announced Saturday the “definitive” severing of ties with war-torn Syria, and the recall of Egypt’s charge d’affaires in Damascus.

He called for the international community to impose a no-fly zone and denounced the role of Lebanon’s Shiite Hezbollah in Syria, where its members are helping the army battle rebels.

Egypt is Sunni Muslim, as are the vast majority of rebels fighting to overthrow Assad, whose Alawite sect is an offshoot of Shiite Islam.