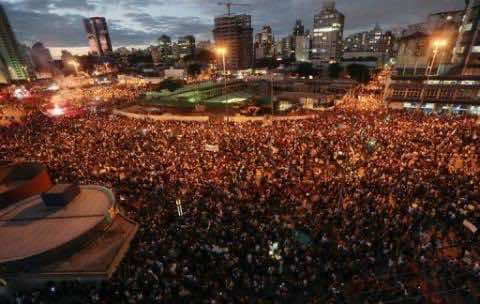 Tens of thousands of people took to the streets of major Brazilian cities Monday protesting the billions of dollars spent on the Confederations Cup and higher public transport costs, police said.

In Sao Paulo, the country’s economic capital and most populous city, an estimated 30,000 marched toward the main Paulista Avenue, with no repetition so far of the violence that marred similar protests last week.

“I came because I want Brazil to wake up. It’s not just to protest the higher transport fares, but also because of shortcomings in education and health,” said 20-year-old Diyo Coelho, who marched with friends carrying flowers.

There were also protests in Belo Horizonte, Fortaleza, Salvador an other cities.

“I am here to show that Brazil is not just about football and festival. We have other concerns, such as the lack of investments in things that really matter, like health and education,” said Daiana Venancio, a 24-year-old lawyer marching in Rio.

Earlier, Sports Minister Aldo Rebelo warned that that authorities would not allow the protests to disrupt international football tournaments Brazil has pledged to host — the Confederations Cup and next year’s World Cup.

“The government assumed the responsibility and the honor to stage these two international events and will do so, ensuring the security and integrity of the fans and tourists,” he said.

Demonstrators in several major cities are up in arms over hikes in mass transit prices — from $1.5 to $1.6 — as well as over the $15 billion earmarked for the two sports events amid calls for more health and education funding.

The Confederations Cup, a dress rehearsal for the 2014 World Cup that runs through June 30, got under way in Brasilia’s national stadium Saturday with Brazil trouncing Japan 3-0.