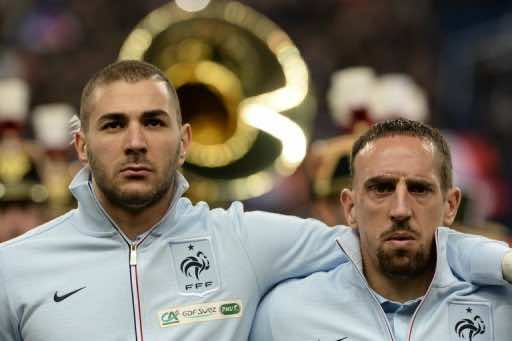 Bayern Munich winger Ribery and Real Madrid forward Benzema face up to three years in prison and a maximum 45,000 euro ($55,000) fine if convicted.

Both deny the charge and the young woman involved, Zahia Dehar, has testified that the players were not aware that she was not 18 when they had sex with her in 2008 and 2009 respectively.

Although the age of consent is 15 in France, paying for sex with anyone under 18 is a crime.

Dehar, now 21, became a celebrity of sorts following the scandal, having launched her own luxury lingerie line, and has been seen as the muse of German fashion designer Karl Lagerfeld.

The 30-year-old Ribery did not turn up at the court as there was “no victim,” his lawyer said, seeking for the proceedings to be held behind closed doors due to their salacious nature.

Ribery has admitted having sex with Dehar but has maintained he did not know she was then under-age. Benzema meanwhile denies any encounter.

Prosecutors had sought an acquittal for the two players and Ribery’s brother-in-law, who was also implicated, but investigating judge, Andre Dando, argued that they must have been aware of her real age.

News of the investigation into Ribery and Benzema broke just before the disastrous 2010 World Cup campaign, during which unprecedented bickering within the French squad resulted in a player boycott, striker Nicolas Anelka being sent home and one of the favourites being eliminated at the group stage.

The badly tarnished image of “Les Bleus” has yet to fully recover from what has become known as the Knysna fiasco after the name of the squad’s South African base.

Ribery, said to be one of the ringleaders of the rebellion against coach Raymond Domenech, was given a three-match ban after the tournament but has since been welcomed back into the fold.

The trial continues till June 26.