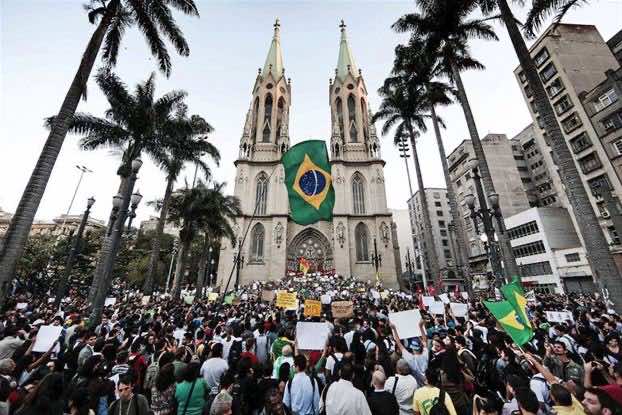 If the young people of Brazil are in the street, it is no longer just to play football there, contrary to the popular image of a country fixated with ‘futebol’ to the point of obsession.

Instead, they are capitalising on the Confederations Cup to demonstrate en masse and voice their indignation as representatives of a dissatisfied middle class that has swelled over the last decade.

With 250,000 people on the streets, Monday’s protests were the biggest in 20 years and came as a surprise in a country rarely inclined to protest, particularly after a decade of social progress in terms of income and employment.

“It’s a first step to show that we are not a dead people,” 24-year-old businessman Bruno Pastan told AFP, having stormed the roof of Brasilia’s National Congress with 200 fellow protesters on Monday night.

“Some people thought that Brazil would hold everything for the football, that we only lived for that.”

The demonstrations started in Sao Paulo, in protest at an increase in public transport prices.

With the aid of social networking websites, the marches spread to other cities and took on other slogans.

Chief among those was the denunciation of the colossal public costs of staging the Confederations Cup and next year’s World Cup, estimated at over $15 billion (11 billion euros), which the protesters said should have gone towards health and education.

“If your son falls ill, take him to the stadium!” yelled one demonstrator, in an ironic allusion to the precarious state of Brazil’s hospitals and the huge sums lavished on the construction of sporting arenas.

The Brazilian movement has parallels with the protests that have erupted in Turkey and Egypt.

“There’s a profound social change in the background, marked by the rise of a new social class,” says economist Andre Perfeito, from the consultancy firm Gradual Investimentos.

In the last 10 years, he points out, Brazil has seen some 40 million people enter the middle class, which now represents over half the population.

There has also been an explosion in consumer spending, fuelled by the use of credit, and a notable increase in levels of education.

But since President Dilma Rousseff came to power two years ago, economic growth has fallen sharply (from 2.7 percent in 2011 to 0.9 percent in 2012), and prices are rising (up 6.5 percent in May on the last 12 months). All of which has a direct impact on people’s wallets.

“Where is the guerilla?” yelled protesters in front of Congress on Monday, in an address to the president, who once fought against Brazil’s military dictatorship.

Her government has lost eight points in the polls due to the impact of inflation, according to research institute Datafolha.

Brazil has agitated for greater spending power for many years, but is still to address several basic problems.

“Large sections of the population, principally urban, are unhappy with the pitiful state of public transport, the disastrous health system and widespread violence,” says Ricardo Antunes, a sociologist from the University of Campinas.

“It’s a situation that for years has been compensated for by increasing salaries and employment (but which now have reached their limits).”

The Confederations Cup has served as a vector for expressing this indignation, he says, “with its monumental stadiums that have cost astronomical sums”.

After years of political and financial scandals, the demonstrators have denounced corruption and taken to the streets without appearing to belong to political parties or unions, which they insult indiscriminately.

“Above all, the dissatisfaction targets all the big parties that don’t resolve the problems,” explains Virgilio Caixeta, a history lecturer at the University of Brasilia.

President Rousseff declared on Tuesday that the country had to listen to the voice “of change” in the streets, and vowed that her government would do so.

Following years of social and economic progress, Brazil has seen “citizens arise who want more and who have a right to more”, she said.

The president also underlined that, aside from improved public services, Brazilians wanted an end to corruption.

“The message coming from the streets is a rejection of corruption and of the misuse of public money,” she said.