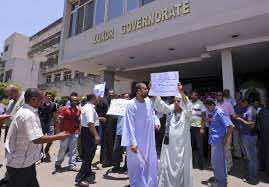 Egypt’s minister of tourism has resigned following the appointment of a new governor in the temple city of Luxor who belongs to an Islamist party linked to a deadly attack on tourists, state TV said Wednesday.

Hesham Zazou said that following the appointment of Adel Asa’ad — a member of the political arm of ex-Islamic militant group Jamaa Islamiya — he “cannot continue in his role as minister of tourism.”

Adel Asa’ad’s nomination sparked fury across the tourism sector, a once-lucrative industry which has been devastated in the aftermath of the 2011 uprising that toppled Hosni Mubarak.

Prime Minister Hesham Qandil has refused Zazou’s resignation and asked him to remain in his post until the situation is reviewed, ministry spokeswoman Rasha Al Azaizy told the official Mena news agency.

But she said Zazou insisted he would not continue working “as long as the new governor remains in his post, greatly harming tourism in Egypt generally and in Luxor specifically”.

Adel Asa’ad belongs to the Construction and Development party, the political arm of Jamaa Islamiya which was blamed for a spate of attacks in the 1990s before it renounced violence.

Jamaa Islamiya claimed responsibility for an attack on a major tourist attraction in Luxor, in southern Egypt, that killed 58 foreign holidaymakers in 1997.

Among the new appointees were members of the Muslim Brotherhood from which Mursi hails, in a move that expands Islamist control of key administrative positions.