Sidi Ifni- My childhood memories are filled with scenes of larger-than-life Amazigh women who lead hard lives bringing up their children, taking care of their homes, catering to the needs of the authoritarian father and graciously using the bare minimum tools to do their daily chores. I understand the sufferings of these Amazigh women because I witnessed it firsthand. 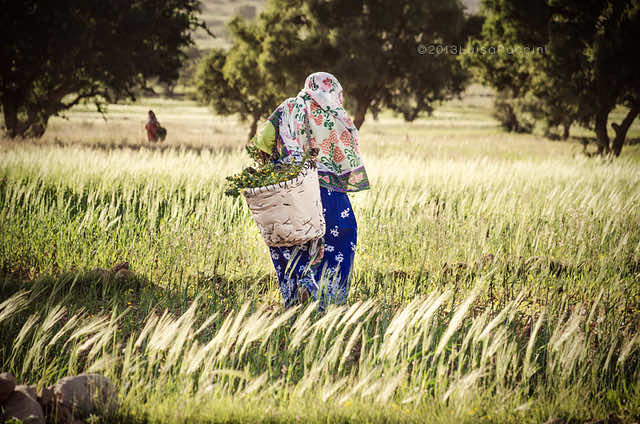 Sidi Ifni- My childhood memories are filled with scenes of larger-than-life Amazigh women who lead hard lives bringing up their children, taking care of their homes, catering to the needs of the authoritarian father and graciously using the bare minimum tools to do their daily chores. I understand the sufferings of these Amazigh women because I witnessed it firsthand.

As a child, I observed them never running out of patience to bear the hardships of life in mountainous areas, in forgotten spots of Morocco and in far-away villages fraught with clay houses.

My mind intermittently flashes back to my late grandmother’s life experiences. Like any other Amazigh grandmother living in the mountains, my grandmother woke up earlier than anyone else in the home, went out to bring bundles of sticks to kindle the fire, and brought some cactus fruit on her way home. She felt honored to do all this because she wanted to take care of us in the most loving way. Alongside my grandfather, we were the last to wake up and the first to complain about the missing things in the house. My moody grandfather often tried to find fault with my grandmother and their talks would often amuse the whole family.

Wrinkles easily formed on the heads of our Amazigh grandmothers, but no one paid attention to the stories the wrinkles represented. They were stories of hope, tenacity, perseverance, commitment, belief, altruism, and self-destruction. These grandmothers sacrificed their own well-being to bring up more than eight children and went on to self-destroy in the process. They found solace and pleasure in self-destruction. Of the photos I still keep of my Amazigh grandmother, I catch a quick glimpse of staring eyes that used to tell the good from the bad, the looming hazard from the safe corner and the ephemeral from the eternal effect of their unconditional love.

The image of my Amazigh grandmother appears before my eyes day and night. She suffered from the neglect of the government, the ill-treatment of authoritarian husband, mass ignorance, apathy of the patriarchal society, misunderstanding on the part of those who do not speak her mother and all other kinds of the worst sufferings. Yet, she succeeded in rearing my mother and in impressing on her the traits of patience and unconditional love that help work miracles inside homes. She passed on her miracles from generation to generation. Regrettably, it appears we do not care about our late grandmothers that have paved the path with so many signs for us.

Towards the end of her life, my grandmother died of cancer at the age of 63. Her death tore apart the home, sending men to work and forcing women to marry. Her death left an indelible influence on my mind. Not long ago, I had a dream in which she told me that she was in a state of unimaginable happiness in the other world. I dreamed that she advised me to pass on the principle of sacrifice to future generations. I dreamed that I shed tears over the memories she brought back as reminders for me. I cannot forget the day she accompanied me when I was on my way to my home village. She filled my pockets with almonds, sweets and a few dirhams. Oh, how selfless you were, my late grandmother!

The greatness of Amazigh grandmothers is without comparison. They lived in mountains, but they succeeded in creating an environment that allowed their children and grandchildren to be well brought up. They toiled in the rain, but they never let their children go unfed. They felt pain in their back, but they never succumbed to the short-lived temptations of life. They bore the taunts of the harsh Amazigh grandfathers, but they forgave the ill-treatment easily as though nothing bad had befallen them. They stumbled in the soil, but they were always on their guard so their children would never encounter the same pitfall. The home was full of our complaints, but my grandmother’s presence dismissed them in one gulp. Margaret Walker once said ” My grandmothers are full of memories, smelling of soap and onions and wet clay, with veins rolling roughly over quick hands, they have many clean words to say, my grandmothers were strong.”