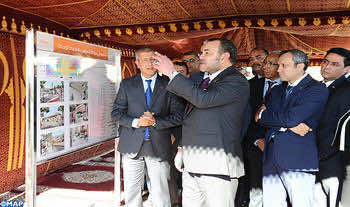 The Oujda-Fez railway line has been reinforced with the projects launched, Wednesday, by King Mohammed VI, intended to provide this major axis with a modern infrastructure enabling it to accommodate the substantial flow of traffic in the best conditions of safety and comfort.

Part of the 2010-2015 contract program signed between the Government and the National Railway Office (ONCF), the structuring projects involve the upgrading and electrification of the Fez-Oujda railway line and the construction of an exchange pole, the second phase of the mega project “Oujda Urban Pole.”

The 900 million dirham project is expected ot generate about 800,000 working days during the construction phase and more than 70 jobs during the operation phase.

The 260 million dirham exchange pole is part of the implementation of the integrated urban project Oujda Urban Pole, the first phase of which was launched by the Sovereign in 2010.

The project provides for the construction of a new-generation passenger terminal, which can accommodate an estimated traffic of 1.5 million passengers by 2020 against 800,000 currently.

Oujda Urban Pole is part of the restructuring of the city of Oujda to provide the city with an integrated urban project, which could herald a new high quality urban dynamic.