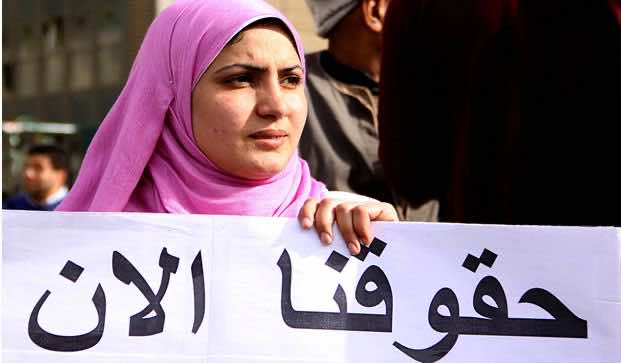 French feminism seems to be absent from the scene when a Muslim veiled woman is attacked or harassed. It’s a double standards game that makes feminism’s principle of women liberation and emancipation highly questionable.

In its broadest definition, feminism is a social, political and philosophical movement for the emancipation and liberation of women from the manacles of patriarchy and male dominance. Historically, feminists have lobbied against gender discrimination and fought for equal social, economic and political rights between men and women. Feminist activists usually fan the flames of criticism in media against female aggression and misogyny of all forms. The Tunisian Femen activist Amina who was arrested following her topless protest in Tunisia received significant support from feminists around the world, who repeatedly protested for her release, issued statements of condemnation on her imprisonment and called on human rights organizations to intervene.

The zeal in defense of Amina, who endorses topless protest and challenges people’s cultural norms and religion, doesn’t show up when a veiled Muslim woman is assaulted or harassed in the worst brutal and misogynistic forms. Morocco World News has reported several cases of racist aggressions against Muslim women (and men also) in the West, particularly in France and the USA, to trigger debate about this growing alarming phenomenon and raise awareness about it.

On May 20th, a seventeen-year old girl in Argenteuil (Val-d’Oise) in the Paris area was subjected to a racist attack. On Thursday June 13th, a veiled pregnant Muslim woman aged 21 years claimed to be assaulted by two men in Rue de Calais in Argenteuil. The aggressors tore her veil and cut her hair humiliatingly.

French feminism which is boastful of its pioneering figures like the renowned Hélène Cixous, Simone de Beauvoir, Julia Kristeva, Christine Delphy etc., reacted with silence to these reported incidents in an indication that leaves no doubt that feminism is a double-faced movement. Where are French feminists who, at every opportunity, take to the streets with their banners denouncing such or such an act and expressing indignation at it? Is it because the assaulted women were Muslim and veiled that French feminism reacted with indifference and showed no compassion or energy to defend their rights to dignity and security?

The silence from the part of feminists when the victim is a Muslim veiled woman puts us in front of one of the most acute challenges of French feminism today: the question of the veil.  Obviously, the trend of Islamophobic attacks on veiled women in France is on the rise. French feminism which is supposed to have a say in this has simply said nothing and remains silent when such silence can be worse than aggression itself. It’s high time that French feminism should come down of its lofty tower and elitist interests to give voice to and represent those who are in precarious conditions such as migrant women, single mothers, women of health problems or socio-economic challenges, and veiled women.