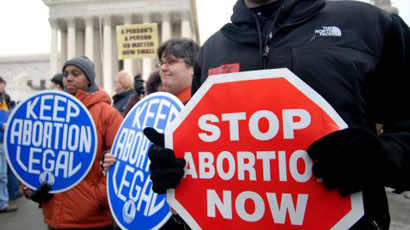 The turning point in the history of abortion in the United States was January 22, 1973. At that time, the Supreme Court sided with Jane Roe during the famous case known as “Roe vs. Wade”, who crossed the boundaries and demanded for her right to legally have access to abortion. Since 1973, Roe has polarized politics and made the politics of compromise impossible. Every democratic president frowned upon this. Every GOP, the Grand Old Party or better known as the Republican Political Party, president found a tower of strength in Roe.  Roe evoked heated debates among citizens. Some argue that states must overhaul their laws towards abortion. They call for abortion to be allowed in order not to violate women’s rights of privacy under the due process clause of the Fourteen Amendment. Others call for putting restrictions on women willing to abort. Other extremists strongly call for banning abortion and consider the latter as a crime.

Forty years have passed and this issue has not faded. It still generates deep and sustained anger among the pro-life constituency. To go further in my discussion, I will rely on the video, “Abortion debates rage on’’, and the article, “In 1973 one fight over abortion ended and another began-Roe turns 40’’, to deal with the following questions: Is abortion right or wrong? Does the fetus feel the pain? And to what extent do abortion debates contribute to the disagreement between political parties in the United States?

Throughout the video and the article, it is crystal clear that abortion evoked heated debates within the United States. Both pro-life and pro-choice voices are struggling to defend their positions. Supporters of abortion use scientific evidence to support their attitude. A British study has shown that the fetus cannot feel the pain before the age of twenty four weeks. They also argue that it is the woman’s freedom to make the ultimate decision. Furthermore, as Monica Potts, an American prospect, says in the video, that abortion is the best decision for the baby as long as the woman cannot afford it. To word it differently, the woman feels irresponsible to bring the child to the world; therefore, having an abortion is the most responsible decision for both the woman and the child.

To go further, pro-choice voices believe that the fetus does not feel the pain because it is still in the early developmental stage. In other words, the embryo has not developed into a child in the sense that the child is sentient, independent and a human being whereas an embryo is an unformed and undeveloped being who has potential for life. It is in a continuous sleep like unconsciousness or sedation. According to supporters of abortion, as mentioned in the video and article, abortion should be legalized and used medically to prevent some women from getting “back alley” abortion procedures.

In contrast with proponents of abortion, pro-life voices strongly believe that the fetus does feel the pain before the age of 24 weeks, as mentioned in the video by Dr. Janice Crouse. According to Crouse, the life begins with the moment of conception. To go further, she argues that women who abort are irresponsible and careless adults that are already aware of contraceptives. Moreover, contraceptives are cheap and readily available. In the late 1940s and 1950s, there was no chemical birth control and non-chemical contraceptives were harder to obtain. The supporters of pro-life, according to anti-abortion voices, have just muddied the water by declaring what is obvious to modern science and rational thinking people that the baby is not a human unless the mother declares it.

Rationalizing a wrong does not make it right. It seems quite clear from the article that the number of opponents is increasing. Despite Roe causing states to overhaul their law towards abortion, restrictions and obstacles are still put on women seeking abortion such as scrapping the trimester system. Until now, Barack Obama encourages conservatives to lower and implicitly ban abortion as much as possible. “We may not agree on abortion, but surely we can agree on reducing the number of unwanted pregnancies in this country.” (Barack Obama, Aug. 28, 2008).

To conclude, Abortion still continues to be an issue that ignites disagreements from both sides. It is not only a matter of life or health issues; rather, it is a matter of politics as well. Although republicans and democrats may prefer to reduce the rates of abortion, they still disagree on certain abortion issues.