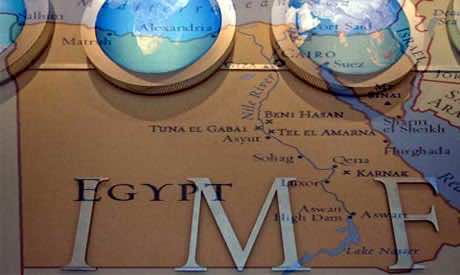 The International Monetary Fund said Thursday it was making progress in talks with Egyptian authorities on a potential loan but that technical issues such as subsidies remain.

“Our work with the Egyptians is producing increased understanding on many of the remaining issues,” IMF spokesman Gerry Rice said.

The spokesman, speaking at a regularly scheduled news conference, said that the IMF was working “constructively” with the authorities with the hope of a swift conclusion of loan negotiations.

“We look forward to the resolution of remaining technical issues and completion of the preparatory work by the authorities,” he said.

“We’re looking in particular for early decisions by the authorities on revenue measures to reduce the large budget deficit and on their plans for the use of smart cards to reduce the cost of gasoline and diesel subsidies.”

The IMF and Egypt have been in talks for months over a multibillion-dollar IMF loan that is contingent on strong support from domestic political actors and a commitment to key reforms.

Last year the IMF reached a deal in principle to provide a $4.8 billion loan to help finance the government while it undertakes reforms.

Egypt, like many governments across the Middle East and North Africa, relies on energy and food price subsidies to help protect the most vulnerable, at the cost of weighing on government budget and debt levels.

The IMF has been urging a shift toward more efficient and targeted forms of social protection in the region undergoing major economic and political transitions following the Arab Spring uprisings.

Egyptian authorities believe the IMF loan will help restore investor confidence in Egypt, where unrest that accompanied the 2011 uprising that toppled Hosni Mubarak hammered revenue from the once-lucrative tourism industry.

The loan was close to completion in November when political changes in Cairo set it back.

Egypt’s current president, the Islamist Mohammed Morsi, is under pressure from an increasingly vocal opposition that accuses him of betraying the goals of the 2011 uprising.

“Our goal remains to bring the discussions with the Egyptian authorities to a speedy and successful conclusion on a national economic program that will support growth, jobs and stability, that could be supported by the IMF,” Rice said.

He declined to give a timeframe for the talks to conclude.