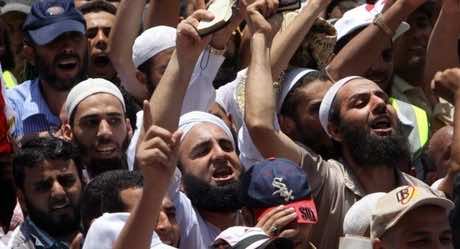 The Freedom and Justice Party (FJP), the political arm of the powerful Muslim Brotherhood from which Morsi hails, and several other groups, have called for a “million-man march to protect the revolution” in Cairo’s Nasr City neighborhood.

The groups met at the Brotherhood’s headquarters on Wednesday to finalize arrangements for the rally, which calls for Islamists to close ranks and “face the counter-revolution”, a Brotherhood statement said.

Friday’s rally is a demonstration of power by the Islamists ahead of planned June 30 demonstrations to call for early presidential elections.

Morsi was elected last year and took office in June, after a military-led transition that followed the ouster of long-time president Hosni Mubarak in a popular 2011 uprising.

But since taking office, he has squared off with the nation’s judiciary, media, police and most recently artists, and his opponents accuse him of giving the Islamists a monopoly over public and private institutions.

Tamarod rapidly picked up steam, and organizers said they have collected millions of signatures demanding Morsi’s ouster, leaving the government jittery and energizing the fragmented opposition.

The Brotherhood “stands firm against violence as a means of change. Those who want change should participate in elections, create solutions & campaign,” Brotherhood spokesman Gehad al-Haddad wrote on Twitter.

And a spokesman for the FJP, Ahmed Aqil, urged protesters “to embrace peaceful expression of opinion”.

In the latest political move to roil the opposition, Morsi appointed 17 new provincial governors on Sunday, including seven from the Brotherhood.

He also named as governor of Luxor a member of an Islamist party whose militants massacred 58 foreign tourists there in 1997, prompting the tourism minister to resign in protest.

The appointments led to clashes in several Nile delta governorates between supporters of Morsi and his foes, in what some fear is a prelude to more serious confrontations on June 30.

A leader of the opposition, former foreign minister and Arab League chief Amr Mussa, recently said that “the regime is sending a message that it is not willing to respond to the demands of the people and is pushing forward with policies that are increasing anger and polarization”.