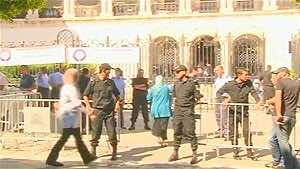 A lawyer for three European activists with women’s topless protest group Femen, jailed for four months for baring their breasts in Tunis, said he expected a verdict in their appeal on Friday.

“I expect a decision during the day, after the hearing” which was due to begin at 1030 GMT, Souhaib Bahri told AFP.

He said the three young women, two French and one German, jailed on June 12 for an attack on public morals and indecency, had benefited from an accelerated appeals process. Appeals normally involve a delay of four to six months.

“It’s a good sign, of course, this swift process. I’m optimistic but I want to wait for the verdict. The first time I was too optimistic and we had a shock,” Bahri said.

He was referring to the four-month jail sentences handed down against the defendants, which were considered harsh in Europe, where the case was seen by some as a test of democratic freedoms under Tunisia’s Islamist-led government which came to power after the revolution of January 2011.

France, Germany and the European Union have all expressed regret at the
severity of the sentences.

The three women were arrested on May 29 for staging their controversial demonstration outside the central courthouse in Tunis in support of Amina Sboui, a detained Tunisian activist from the same radical women’s group.

Sboui was arrested for painting the word “Femen” on a wall near a cemetery in Kairouan last month, in protest against a planned gathering of radical Salafists in the historic Muslim city south of Tunis.

She remains in custody while a judge rules on whether she should face charges of indecency and desecrating a cemetery.