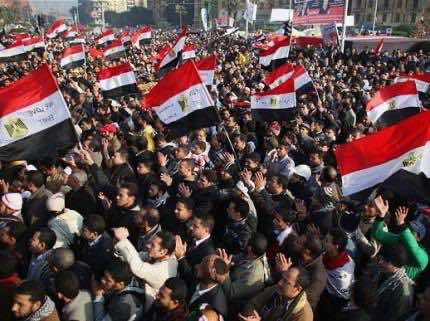 Tens of thousands of Egyptian Islamists gathered for a show of strength in Cairo on Friday ahead of planned opposition protests against President Mohamed Morsi, highlighting the tense political divide in the Arab world’s most populous state.

Carrying Egyptian flags and portraits of the president, they flooded into the large square outside the Rabaa al-Adawiya mosque in the Nasr City neighborhood and into the surrounding avenues.

Islamist groups led by the powerful Muslim Brotherhood from which Morsi hails, had called for the rally ahead of planned June 30 protests to demand an early presidential election.

Morsi has been in office for just one year.

Inside the mosque, worshippers finished their prayers and broke out into chants of “Morsi is a president for all Egyptians” before joining the crowds on the streets.

The turnout, they said, was proof that Morsi enjoyed the support of the Egyptian people.

“We are here in such huge numbers so that the secularists don’t think we are a minority… We are capable of protecting legitimacy and Sharia [Islamic law],” said Hamida Bakkout, 43, holding a picture of Morsi.

Omar Mostafa, 18, who had come from the Nile Delta province of Beheira, said “this is a message that there are many of us behind the president. We don’t care about the mobilisation of the opposition.”

Many supporters had been bussed in to Cairo for the event, AFP reporters said.

The Islamists accuse the opposition of being remnants of the regime of ousted president Hosni Mubarak and of seeking to sow chaos.

Morsi was elected after a military-led transition that followed the ouster of long-time president Mubarak in a 2011 popular uprising.

But since taking office, he has squared off with the nation’s judiciary, media, police and most recently artists, and his opponents accuse him of giving the Islamists a monopoly over public institutions.

Tamarod rapidly picked up steam, and organizers said they have collected 15 million signatures demanding that Morsi quit, leaving the government jittery and energizing the fragmented opposition.

A spokesman for the FJP, Ahmed Aqil, urged protesters “to embrace peaceful expression of opinion”.

US Ambassador Anne Patterson weighed in, urging protesters to organise rather than take to the streets, provoking fury in opposition quarters.

“Some say that street action will produce better results than elections. To be honest, my government and I are deeply sceptical,” Patterson said in a speech this week.

“We oppose chaos. Chaos is a breeding ground for instability… I recommend Egyptians get organized. Join or start a political party that reflects your values and aspirations,” she said.

In the latest move to roil the opposition, Morsi appointed 17 new provincial governors on Sunday, including seven from the Brotherhood.

He also named as governor of Luxor a member of an Islamist group whose militants massacred 58 foreign tourists in the town in 1997, prompting the tourism minister to resign in protest.

The appointments led to clashes in several Nile delta provinces between supporters and opponents of Morsi, in what some fear is a prelude to more serious confrontations at the end of the month.

Islamist groups have yet to announce whether they will take to the streets on June 30.

A leader of the opposition, former foreign minister and Arab League chief Amr Mussa, recently said that “the regime is sending a message that it is not willing to respond to the demands of the people and is pushing forward with policies that are increasing anger and polarisation.”