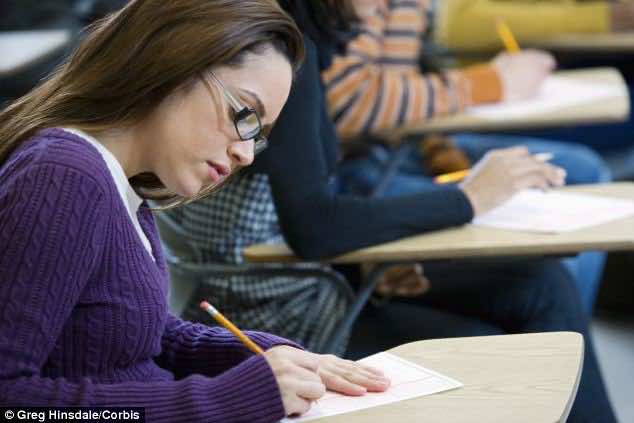 If there’s anything in the world capable enough of consoling, Mr. Mohammed El Ouafa, Morocco’s minister of education with his “war” against cheating, it will be the news of this French mother who allegedly took a baccalaureate exam for her daughter.

A 52-year-old woman who is named according to French daily Le Parisien only as Caroline D., was caught on Wednesday impersonating her 19-year-old daughter by getting dressed in converse sneakers, low-waisted jeans and covered in heavy make-up in order to improve her daughter’s performance in the English exam.

The plot would’ve gone unnoticed since people from all ages can participate in the baccalaureate exams, but an exam supervisor who was already in charge of monitoring during Monday’s philosophy test-in which the daughter herself participated- observed that something is wrong and that the lady sitting there-looking at the ranks- is not the same person who took the philosophy test two day ago.

Lycée Bossuet-Notre Dame’s officials in the 10th arrondissement of Paris notified the local police who discreetly escorted the mother but after allowing her to keep answering the English exam for two hours in order not to disturb the other candidates.

As soon as she was taking into custody, “the cheating mother” admitted to cheating and explained her actions as an attempt to help her daughter who finds a hard time answering in English.

According to Le Parisien, the mother faces fraud charges and her daughter may be prohibited from all official exams for a period of five years.

Like his Moroccan counterpart, the French education minister is trying to implement more punishments and legal restrictions to intimidate pupils from considering any cheating endeavors.

“Despite the electronic smart phone detectors and other tools available in the fight against academic dishonesty (….), and despite all the other punishments strengthened by the authorities, the cheating is increasing… the five year ban was slapped on 140 pupils last year, compared to only 67 in 2011,” Said Thelocal.fr website.

Mr. El oufa don’t get angry, you are not alone in this. Cheating is a global phenomenon.