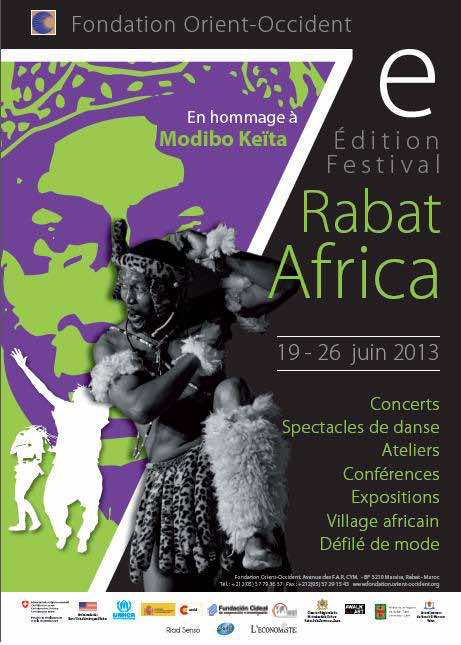 On Wednesday, I was lucky enough to be taken by a few of my co-workers to a portion of the Rabat Africa festival. I couldn’t more strongly recommend attending this festival.

Not only was I impressed by this festival, I was also surprised by its existence. Basically, before arriving in Morocco I had expected to only encounter Arab culture. However, in many ways (especially by interning at an association concerned with preserving Amazigh culture) I’ve realized that this was a false expectation.

Although I know that a lot of African migrants come to Morocco from more Southern countries to study or work, or simply to stay until they can make their way into Europe- I did not realize until I got here how many of such migrants there would actually be. As life must have been tough enough for these people to decide to leave home, I’m sure it didn’t get any easier when they found themselves in a strange country, without their families, potentially unable to speak the local language and unfamiliar with Moroccan culture. I was impressed to see there was an event to give them recognition.

One thing I have found a bit perplexing since arriving here, is that many Moroccan people I have met, do not seem to identify as African, although this is indisputably the continent upon which Morocco is situated. I can only speculate as to why this is. Perhaps it is because of the Arabization that the country has undergone, perhaps it is because of a desire to preserve Morocco’s unique identity, perhaps it is because of a negative perception of African migrants, or perhaps it is something I am entirely unaware of. After all, I have been here less than two months. I am also sure, that Moroccan identity, would be defined differently by everyone with an opinion on the issue. Anyway, I was not expecting to attend an African festival while here.

The portion of the festival I attended included a lot of African dancing. I saw children of all ages, from Morocco and other African countries perform traditional as well as modern dances. My favorite performance, was done by an African American dance group, called Step Afrika. They danced to beats that they made themselves as they danced; clapping, stomping, and singing as they performed. Very unique.

Now as blown away as I was by the performance of the Step Afrika group, I was admittedly a little disappointed at first that I had come all the way from Canada, hoping to experience something new and ended up seeing an American dance group. “How typical” I thought. However, I ended up being completely impressed by the performance and was very happy to see that at the end, Step Afrika was joined by dancers from all over the African continent, including Moroccan dancers.

It reminded me that the entire purpose of the festival was to celebrate African culture wherever it exists, both at home and abroad, and this was well illustrated in the collaboration between Step Afrika and the rest of the African dancers for the finale of their performance. This also reminded me, how fortunate I am to have the opportunity to visit this diverse and fascinating continent.

There is still plenty of time to attend the Rabat Africa festival, as it continues until June 26th. The festival will include not only dancing, but films, art installations and also education about the challenges faced by African migrants. The festival will conclude with a discussion and debate about the future of African migrants in Morocco. Information on the festival is available online, and you can visit the Rabat Africa Festival 2013 facebook page at https://www.facebook.com/pages/Festival-Rabat-Africa 2013/166014103547184