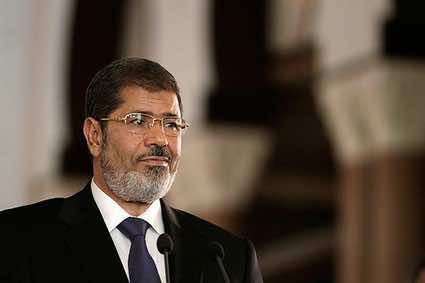 Egyptian President Mohamed Morsi has repeated a call for dialogue in an attempt to mitigate deep political divisions ahead of planned rallies against him, while opposition leaders insisted on Saturday that he step down.

“I have said it before. I urge everyone to sit together to discuss what would achieve the interests of our nation,” Morsi said in an interview published in the state-owned Akhbar al-Youm newspaper.

The interview comes a day after tens of thousands of Morsi supporters massed in Cairo in a show of strength ahead of opposition protests planned for June 30.

Egypt is deeply polarised. Morsi’s supporters say he is clearing institutions of decades of corruption but his critics accuse him of concentrating power in the hands of his Muslim Brotherhood movement.

Since taking office a year ago, Morsi has squared off with the judiciary, media, police and most recently artists.

Leading Egyptian dissident Mohamed ElBaradei urged the president to resign for the sake of national unity.

“For Egypt’s sake, I call on President Mohamed Morsi to resign and give us the opportunity to begin a new phase based on the principles of the revolution, which are freedom and social justice,” ElBaradei said.

“I would like to call on President Mohamed Morsi and his Muslim Brotherhood to respond to the cries from all over Egypt,” he said at a conference grouping opposition leaders aimed at drawing up a plan for a post-Morsi Egypt.

There is much anticipation and anxiety ahead of the June 30 protests, with fears of violence and instability.

But Morsi says there is still room to resolve differences off the streets.

He said he would consider bringing forward parliamentary elections, which are scheduled to take place later this year, although no date has yet been set.

“I will continue in my pursuit for contact, and I may speed up parliamentary elections as a way of involving everyone in an agreed method to manage our differences,” Morsi said.

“The call for protest on June 30 reflects the atmosphere of freedom granted to us by the revolution” of 2011, he said.

Morsi has been in office for just one year and in Saturday’s interview he implied he had no intention to step down before the end of his four-year term.

“If Egyptians choose someone other than me in the next elections, I will hand him the power according to the constitution and to the law,” Morsi said.

“And I will do this with goodwill… in accordance with democracy and my rejection of any monopoly of power,” he said.

He appealed for calm and accused those who benefited from the regime of ousted president Hosni Mubarak of inciting instability.

“They want to bring back the past because the revolution harmed their interests. (People) must stop their evil plans because they do not want calm and stability for Egypt,” Morsi said.

The tone reflects a view taken by his supporters who accuse the opposition of being remnants of the Mubarak regime and of being counter-revolutionary.

Morsi’s critics say he has betrayed the revolution that brought him to power and has failed to achieve any of its goals.

Political divisions have also spilled onto the streets in violent and sometimes deadly confrontations.

With Egypt deeply polarised between Morsi’s mainly Islamist supporters and wide-ranging opposition, ElBaradei said it was time for “national reconciliation” in order to move forward.

What is needed is “a system based on free and fair elections with international and local monitoring (and) parliamentary elections to have all segments of society represented,” he said.

“We want the Egypt that the revolution rose up for,” he said.

A campaign dubbed Tamarod (rebellion in Arabic) called the June 30 rally to coincide with the first anniversary of Morsi becoming president.