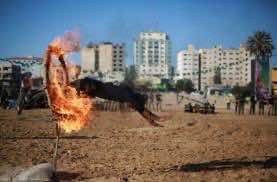 Hamas hanged two men accused of collaborating with Israel on Saturday, a statement from the interior ministry of the Islamist movement’s government in the Gaza Strip said.

The ministry said that it had executed the two men in accordance “with what Palestinian law stipulates”, identifying them as “the collaborator with the occupation A.G., 49, and the collaborator H.K., 43.”

A military court in Gaza had sentenced the two to “death by hanging after the tribunal convicted them 10 years ago of charges ranging from collaborating with a hostile foreign entity”, to involvement in “killing and espionage”.

A number of representatives from civil organisations attended the execution, the statement said.

The Hamas government executed three men in April 2012 after they were accused of “collaborating” with Israel.

On Thursday, a Palestinian man found guilty of the same charge was sentenced to death by a military court in Gaza, which is controlled by Hamas.

It was the fifth such sentence handed down by the authorities in the coastal enclave since the beginning of the year.

Under Palestinian law, collaboration with Israel, murder and drug trafficking are all punishable by death.

All execution orders must be approved by the Palestinian president before they can be carried out, but Hamas no longer recognises the legitimacy of Mahmud Abbas, whose four-year term ended in 2009.

Israeli security forces use Palestinian informers to thwart militant attacks and assist in the assassination of top militants.

Since the September 2000 outbreak of the Palestinian uprising, dozens of Palestinians accused of collaborating have been condemned by Palestinian martial courts or killed by militants in both Gaza and the West Bank, which is governed by Abbas’s Palestinian Authority.