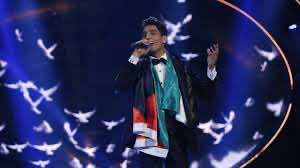 Tens of thousands of jubilant Palestinians celebrated into the early hours of Sunday after a 23-year-old Gazan singer won the prestigious Arab Idol talent show that has captivated millions across the Middle East since March.

The meteoric rise of Gaza’s Mohammed Assaf to snatch the top prize in the pan-Arab singing contest sparked an unprecedented outpouring of joy across the West Bank and the Gaza Strip, unifying an often divided public.

Assaf’s victory in the finals, held in Beirut and screened live on television across the Arab world, marked the first such success for a Palestinian entertainer.

“Mohammed Assaf is the Arab Idol!” declared the presenter of the show which is modelled on the US hit show Pop Idol, as coloured confetti rained down on the cheering audience.

The handsome, tuxedo-clad singer immediately dedicated his win to “the Palestinian people, who have been suffering for more than 60 years from (the Israeli) occupation”.

Since the contest began in March, Assaf has earned himself an army of followers who have been glued to the big screens in cafes and restaurants across the territories, listening enraptured as his powerful voice propelled him further and further ahead in the weekly sing-off.

As his name was read out, his mother, who was wearing a traditional Palestinian embroidered dress, her shoulders wrapped in the black, green, white and red of the national flag, burst out crying.

Spontaneous celebrations broke out across the Gaza Strip, and in the West Bank, where tens of thousands took to the streets, cheering and dancing, car radios blasting the traditional Palestinian song which propelled him to victory as people handed out sweets to passers by.

His victory was splashed across Sunday’s front pages with many making a play on words linked to a remark by one of the judges who described him as “the best rocket” to have come out of Gaza – “a rocket of peace, not war”.

Each edition of the twice-weekly show, aired by the pan-Arab MBC channel in Beirut, has been followed with increasing anticipation, with social networks mobilising to boost votes for their favoured candidate.

In Ramallah, the West Bank’s political capital, the streets were jammed with people until the early hours of Sunday.

Similar scenes were played out in Gaza, where a sea of smiling faces packed the streets.

“The mood is indescribable. Everyone is celebrating. Thank you, Mohammed Assaf, for bringing joy to our hearts!” said Gaza resident Mohammad Dahman.

“We haven’t felt this joy in a long time!”

In northern Lebanon, Palestinian refugees in the Beddawi camp fired into the air and honked car horns to celebrate, while major partying also took place in the southern city of Sidon, an AFP correspondent said.

Born in Misrata, Libya, Assaf grew up in the Khan Yunis refugee camp in southern Gaza, one of the world’s poorest and most densely-populated areas which has been subjected to a tight Israeli blockade since 2006.

Gaza’s Islamist Hamas rulers disapprove of shows such as Arab Idol, which are considered to be un-Islamic, but they have not clamped down on support for the contest.

“All Palestinians share in his success. Mohammed’s music is a universal language and speaks to all of us,” said UNRWA chief Filippo Grandi.

“How fantastic that a Palestine refugee from Gaza should bring us all together in this way.”

There were even congratulations from Israel, with the army’s Arabic spokesman Avichai Adraee hailing his victory on Twitter.

“Congratulations Assaf on winning – we wish Hamas would allow the people in the Strip to be happy instead of restraining all signs of happiness as they have been doing so far,” he said.

And the left-leaning Haaretz newspaper also hailed his success saying: “A Palestinian hero is born.”

“Not since the IDF (army) incursions into Gaza in 2002, have Palestinians had a unifying experience on par with Mohammed Assaf’s success on Arab Idol,” the paper said.