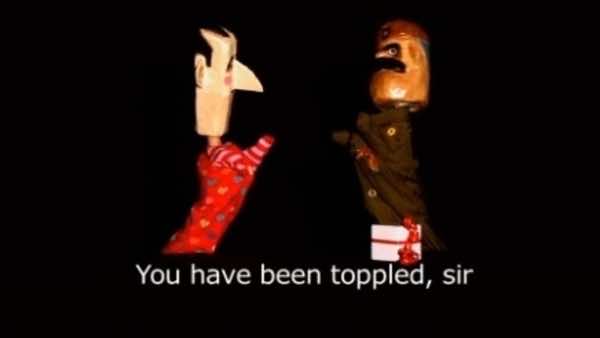 A group of anonymous Syrian artists have decided to shift from the virtual world into reality by taking their online satirical puppet show to Syria’s crisis-torn streets.

The series depicts Assad through a puppet named Beeshu, portrayed as a “brutal, childish son of a dictator with a beaky nose and saucer-shaped ears,” the newspaper reported.

Assad is seen protected by his henchman, named The Goon, while citizens are depicted as “brave and idealistic,” the report added.

The first series, launched back in 2011 when the uprising against Assad erupted, attracted more than 200,000 views on YouTube and was broadcast on the Dubai-based Syrian opposition channel Orient TV, The Guardian said.

The series’ director, identified as Jameel, told The Guardian that using puppets was preferred to keep the identities of the 10 artists working in the show unknown.

He added that the idea of the show was fitting because their small size “was a good way of lampooning the regime that presents itself as godlike.”

Jameel told the newspaper via a Skype interview that the show’s episodes were filmed in Beirut.

“We disguised the puppets, especially the one of Beeshu,” he said. “We gave him a mustache and extra hair. Otherwise, everyone would have recognized him.”

The number of domestic viewers of the show’s second and third series was unfortunately decreased as conditions escalated in the country.

However, the show’s creators decided in January to secretly travel to the rebel-held town of Manbij in the northern region of Aleppo to perform live in an arts festival organized by local activists, The Guardian added.

On the day of their arrival, Assad forces bombed the town killing at least 12 people.

“We were very shocked and the organizers of the festival thought it should be delayed,” said Jameel. “We felt we couldn’t wait another week, but we didn’t want to gather people indoors in case there was another air strike. So we performed some of the episodes in the street during a protest [about the bombings].”

Top Goon will be shown next month in London as part of the Shubbak festival of Arab culture.