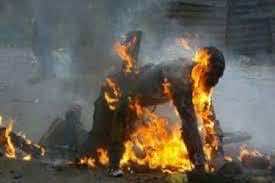 A Moroccan man died after setting himself on fire in the central Meknes region in protest at having his application for a residency permit rejected, a human rights activist said on Tuesday.

The incident occurred on Monday in the town of Sebaa Ayoun, near the city of Meknes, according to the local representative of the Moroccan Association of Human Rights.

“The man went to apply for a residency permit but he was refused. So he covered himself with petrol and set himself on fire. He died three hours later,” the activist told AFP.

Moroccan news websites gave the victim’s name as Abdelkabir Al-Atawi, saying he was a father of five, and confirming that he staged his dramatic protest out of frustration at the behavior of the local authorities.

Morocco has witnessed numerous self-immolations, especially by unemployed graduates, since the start of the Arab Spring uprisings, which began in Tunisia in December 2010 when a street vendor set himself on fire in a act of protest against police harassment.

But popular discontent remains amid extreme social inequality, corruption and a bloated civil service, with jobless youths frequently protesting in the capital.