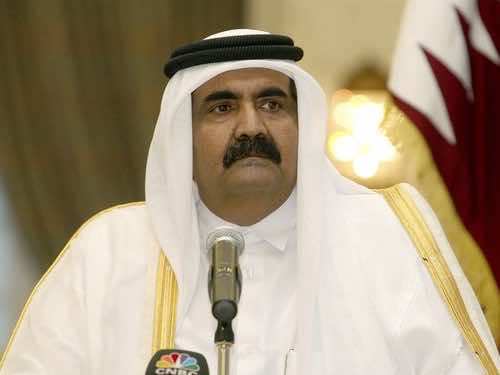 National Qatari TV has aired live footage of the Qatari emir and his elected crown-prince Tamim Bin Hamad Al Thani standing shoulder to shoulder greeting hundreds of members of the ruling family and other officials.

Sheikh Hamad has always involved his son Tamim and appeared with him during key events, and it was anticipated to succeed to his father, but it wasn’t expected for the emir to make such a move while being as a healthy and sound 61-year old. With this decision, Qatar’s emir sets the example for the agitated Middle East and neighbor Arab Gulf states, of humility, youth-empowerment and selflessness.

While all Arab rulers never leave power until death or a coup d’état forces them to, Sheikh Al Thani, besides what some cynics might speculate that he is possibly secretly sick; his nation’s political analysts and close members assure everyone that he has never hidden anything from his people and that this is merely a well-studied move, in which he is expected to remain a guiding force and advisor to the new Emir, who undoubtedly has a great example to follow:  A father who mediated in conflicts, visited suffering lands like Gaza and donated beyond generously, thrived in global investments with a sovereign fund of nearly $200 billion, and defeated other countries to the rights to host the 2022 world cup, to name a few.

Qatar is, without a doubt, a great example of the perfect nation that uses its wealth to help its people but also comes with unconditional assistance to nations in need. While today’s decision  adds to the respect and admiration people have for Sheikh Hamad Al Thani, it will likely unsettle some old Arab rulers, who are often ill, shaky, and whose crown-princes are older than the 61-year old sheikh Hamad, but yet are still holding to the power.

This abrupt transfer of power might also make some Arab countries wonder if a younger, energetic updated ruler is what they need to improve their situation, be it economic, political or social.

Kudos to Hamad Bin Khalifa Al Thani for decidedly proving that his love for his nation and youth-empowerment is greater than his love to office and power.