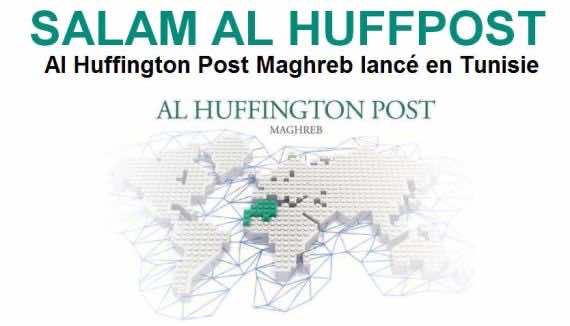 “I’m delighted to welcome Tunisia, Morocco and Algeria to the HuffPost family,” said Huffington. “A month after launching our first Asian edition, in Japan, we’re thrilled to be bringing the HuffPost platform to Africa and inviting people in Maghreb to add their voices to the growing global conversation. And the way Al Huffington Post Maghreb came to be is the best evidence of the power of that conversation: Alix and Fares were inspired by our French edition, Le HuffPost, and came to us with the idea of expanding to Maghreb, which we’re delighted to be doing.”

“Arianna has created a new digital journalism, rigorous, inventive and popular, widely opened to contributions. Covering the Maghreb countries with a specific edition of The Huffington Post, including three editorial staffs working together around a common approach, became obvious to me with the Arab Spring and the social media explosion. I am proud to be part of this adventure which will consolidate public debate,” said Alix Etournaud.

“I am very pleased to participate in this alliance with the world’s leading pure player,” said Fares Mabrouk. “At a time of globalization of the media sector, I hope that our voices, sometimes divergent, can make a strong place in this new order and fully participate in the emergence of an adversarial public space. It is time to create synergy by bringing editorially our Maghreb countries to sustain a common cultural space and to meet the expectations of the audience.”

“During the Arab Spring, Northern Africa showed the world what can happen when individual voices are organized and amplified by technology,” said Huffington Post Media Group CEO Jimmy Maymann. “We think that kind of environment provides fertile soil for The Huffington Post platform.”

Al Huffington Post Maghreb will eventually include three editorial staffs of six to eight journalists each, first in Tunisia, then expanding to Morocco and Algeria. Al Huffington Post Maghreb brings The Huffington Post’s signature mix of news, blogging, community, video and social engagement to French speakers in North Africa. Kader Abderrahim, a renown professionnal, will be editor at large. Houeida Anouar is appointed editor in chief.

This new venture is a part of The Huffington Post’s continued international expansion. The Huffington Post is both a journalistic enterprise with editors and reporters in the UK, Canada, France, Spain, Italy and Japan (with a German-language edition launching in the fall) and a platform, with over 50,000 bloggers worldwide — from politicians, students and celebrities to academics, parents and policy experts — who contribute in real-time on the subjects they’re most passionate about. It has also reached 250 million comments. Global editions of The Huffington Post have 75 million unique visitors a month (comScore metrics, April, 2013). HuffPost Live, a live-streaming video network that uses the most engaging stories on HuffPost, launched in 2012 as the jumping-off point for conversations and commentary.