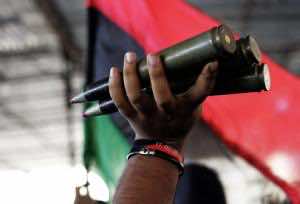 Libya is becoming an important transit hub for terrorists, constituting an “extremely dangerous” development in the region, an African Union leader said Tuesday on the sidelines of a regional security meeting in Algeria.

“I have many reports which say Libya has become an important transit hub for the main terrorist groups travelling from one country to another,” said Francisco Caetano Jose Madeira, the AU’s special representative in charge of counter terrorism.

“We have information according to which some terrorists active in Mali consider Libya as a refuge and a place to regroup,” Madeira told journalists, describing that as something “extremely dangerous.”

The vulnerable security situation in Libya and the porosity of its borders nearly three years after an uprising toppled dictator Moamer Kadhafi, was a key concern at the two-day meeting in Algeria’s western city of Oran.

“The question of Libya is on everyone’s mind,” said the European Union representative for the Sahel region, Michel Reveyrand de Menthon.

He described the north African country as “one of the keys” to stabilising the Sahel, a vast strip of land abutting the southern Sahara desert from Mauritania on Africa’s west coast to Eritrea in the east.

The EU has offered to cooperate with Libya on the question of border security but Western sources say the lack of organisation in the country since Kadhafi’s overthrow makes such a project “very difficult.”

“Very few Sahel countries have the means to really protect their borders,” the AU’s Madeira said.

In Mali, the security situation remains highly uncertain, despite the UN Security Council agreeing on Tuesday to a 12,600-strong peacekeeping force, and a recent ceasefire accord allowing for the army to move into key areas of the north so that presidential elections can be held in July.

There is little information on the fate of many Islamist militants who took over the north of the country last year before they were driven out in a French-led military intervention launched in January.

“It’s hard to know exactly what is going on. The threat is always there but it is difficult to identify,” said one Western diplomat.