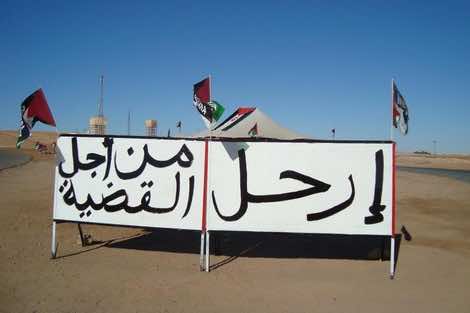 It’s very ironic, and incomprehensible that the man who is ostensibly leading the so-called nation of the Sahara towards emancipation and liberation is himself a dictator who continuously, and since 1975, succeeds himself in elections with only one candidate who is himself: Mohamed Ben Abdelaziz Al-Morakchy.

The man who claims to defend the right to self determination is depriving the Sahraoui people of Tindouf of their right to self-determination. The destiny of the Tindouf Camps refugees was and continues, until an unknown date, to be at the hand of this Stalinian ‘leader’ who controls the camps with an iron fist and prolongs the plight of the refugees under inhumane conditions in Tindouf.

The status quo, fortunately, has started to shake up thanks to the spirit of protest ignited by Arab revolutions. Raised first in face of Zine Al-Abidine Ben Ali of Tunisia and subsequently against other dictators in the region, the famous slogan of ‘dégage’ (leave) echoed in the ears of the Polisario leader Mohamed Ben Abdelaziz who was surprised by more than 400 protestors asking him to step down in protest against the conditions of extreme poverty and humiliation in the Tindouf Camps.

According to media sources, many angry people gathered in front of the auditorium which hosted the 43 anniversary of the so-called “Elzimlah uprising” and raised the slogan “dégage.. dégage” before storming the hall where Mohamed Ben Abdelaziz and an Algerian delegation were celebrating the anniversary. Embarrassed and surprised, the Polisario leader slipped away leaving the room to its chairs and banners! After some violent skirmishes between the angry demonstrators and members of the security forces of the separatist front, the bodyguards of Mohamed Ben Abdelaziz managed to evacuate him from the room by the back door to ride his car and disappear.

It should be noted that many voices have started to rise from within the Tindouf Camps criticizing the way Mohamed Ben Abdelaziz manages the Camps where life gets increasingly hellish. Khat al-Shahid (The Line of the Martyr) Movement which announced its existence on July 4, 2004 accuses the Polisario leader of confiscating the opinion of the Sahraoui people and propagating corruption nepotism, and tribalism. The reformist movement asks for drastic democratic reforms that end the monopoly of Mohamed Ben Abdelaziz on the political scene for more than 35 years. However, the Polisario leadership usually reacts with violence and human rights abuses against any dissenting voices.

Mustapha Salma Ould Sidi Mouloud, a former police chief of the Polisario Front, is another political dissident who continues to suffer exile in Mauritania away from his family and children for expressing his support of the autonomy plan proposed by Morocco. The Sahraoui activist who was denied the right to re-unite with his family in Tindouf Camps started a hunger strike before the United Nations High Commissioner for Refugees in Mauritania. After a month of hunger, Mustapha’s health suffered severe deterioration for which he was taken to the emergency department at the national hospital in Nouakchott on Tuesday, June 18, 2013.