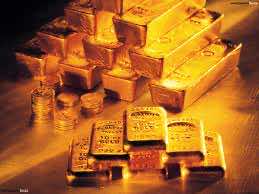 Gold fell to its lowest in nearly three years on Wednesday, pressured by strong U.S. economic data that boosted stock markets and supported the U.S. Federal Reserve’s plan to scale back its monetary easing measures in the next few months.

Bullion, now down for a seventh session out of eight, has been sliding since Fed Chairman Ben Bernanke laid out a strategy last Wednesday to wind down the bank’s $85 billion monthly bond purchases on the back of a recovering economy.

Prices of gold, typically seen as hedge against inflation, have been supported in recent years by central bank steps to support their economies.

The metal has now lost 10 percent, or about $140 an ounce, since the beginning of last week.

“We’ve pushed past the $1,270 level seen last week. That’s a key technical level so we are going through a whole bunch of stop losses,” said Victor Thianpiriya, commodities analyst at Australia and New Zealand Banking Group.

Comex gold and spot silver both fell to their lowest since August 2010.

Strong economic data has prompted the Fed’s decision to consider a wind-down of bond purchases from later this year and end purchases by mid-2014, raising fears that central banks around the world would pull support.

When gold fell the most in thirty years in mid-April after 12 annual gains, strong physical demand in Asia helped cap losses.

However, this time around demand has not risen strongly enough to support prices as buyers are waiting on the sidelines for the markets to stabilize.

“In April we had a lot of demand, it made it hard to get hold of bullion,” said Gregor Gregersen of Silver Bullion Pte Ltd, a gold and silver dealer in Singapore.

“This time, we saw an increase in demand but not the way we saw in April.”

Liquidity issues in China have renewed fears of a slowdown in the No. 2 gold consumer.

The People’s Bank of China has raised concerns of a lasting credit crunch as it tries to curtail a vast informal loan market and shore up growth, although it has sought to allay fears that its tough stance will lead to a banking crisis.

Demand in India, the top gold consumer, has fallen as the government imposes new rules to discourage gold buying in an effort to reduce a record current account deficit.

SPDR Gold Trust, the world’s largest gold-backed exchange-traded fund, said its holdings fell 16.23 tonnes to 969.50 tonnes on Tuesday, to their lowest since February 2009.