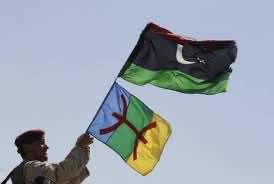 A Berber was voted Libya’s interim leader on  Tuesday, the first member of the long oppressed minority to hold high office,  but he faces huge challenges addressing growing security concerns.

Meanwhile, on the sidelines of a regional security conference in  neighbouring Algeria, a top African Union counter-terrorism official warned  that post-Kadhafi Libya had become a major transit hub for terrorists.

Nouri Bousahmein, an independent member of the General National Congress  (GNC), was elected its head in place of Mohammed Megaryef, who stepped down  after a law was adopted barring from politics those who served under veteran  dictator Moamer Kadhafi.

He was chosen by the assembly on a second ballot, after leading a nine-candidate first round.

He received 96 out of 184 votes, against 80 for another independent,  Al-Sherif al-Wafi.

Libya’s two leading parties — the Muslim Brotherhood-backed Party of  Justice and Construction and the liberal Alliance of National Forces — did  not put forward candidates to head Libya’s highest legislative and executive  body.

Bousahmein is a law graduate of the University of Benghazi and worked at  the Abu Kamash chemical complex from 1978 to 2000.

He was elected to the GNC from his home town of Zuwara and became a  rapporteur of the assembly.

The Berbers make up about 10 percent of Libya’s population. They were  persecuted under Kadhafi and continue to feel marginalised under the new  regime even though they played a big role in the 2011 uprising.

They live primarily in the mountains southwest of the capital or, like the  Tuaregs, in the southern desert.

Megaryef was Libya’s ambassador to India in the 1980s under Kadhafi before
he defected to become a leader of the exiled opposition for three decades.

He was elected to head the GNC last August following Libya’s first  post-uprising polls in July.

He stepped down at the end of May to comply with the law passed at the  beginning of that month barring Kadhafi-era officials, despite it not having  yet come into force.

A number of MPs had proposed exempting him from the law, which bans  officials who served under Kadhafi between September 1, 1969 and the overthrow  of his regime in October 2011.

The tough challenge facing the new interim leader in restoring security to  a country that remains awash with weapons left from the uprising was  highlighted by a deadly attack on an army checkpoint earlier on Tuesday.

Libya’s authorities are battling to establish military and security  institutions capable of restoring law and order and state authority in the  face of armed militias who fought Kadhafi’s forces.

The violence has been particularly acute in  second-largest city Benghazi,  cradle of the uprising, where Islamists launched a deadly attack on the US  consulate on last September.

“I have many reports which say Libya has become a major transit hub for the  main terrorist groups travelling from one country to another,” the AU’s  special representative in charge of counter-terrorism, Francisco Caetano Jose  Madeira, said in Algeria.

Madeira said something “extremely dangerous” for the region as a whole.

The vulnerable security situation in Libya and the porousness of its vast  desert borders was a key concern at the two-day security meeting in Oran.

“The question of Libya is on everyone’s mind,” the European Union’s  representative for the Sahel region, Michel Reveyrand de Menthon said.

The EU has offered to cooperate with Libya on tightening border security  but a Western source said the lack of organisation in the country since  Kadhafi’s overthrow currently makes such a project “very difficult.”