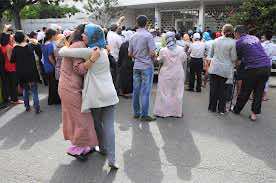 The Ministry of National Education on Wednesday announced the results of baccalaureate exams , and the number of students who passed the exam reached 146, 979 out of 484, 780 candidates.

According to a press release by Ministry of National Education, the overall success rate didn’t not exceed 37% in the regular session.

At the national level, females outperformed males in the baccalaureate exams and the percentage of success in their ranks reached 51%.

The students of scientific and technique disciplines outperformed their peers in arts and linguistics with a success rate of 41.91%, and 27.82% respectively.