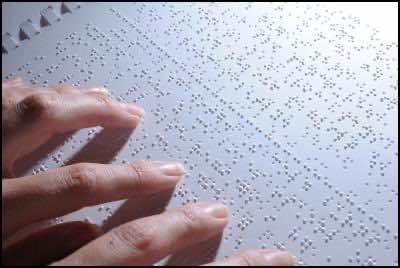 A long-awaited international treaty that would give hundreds of millions of blind and visually impaired people better access to books is to be signed Thursday, according to the organisers of a conference in Morocco.

Hundreds of delegates from the World Intellectual Property Organization’s 186 member countries gathered in the central city of Marrakesh to finalise the treaty seeking to overcome the restrictions to published material that copyright laws impose on the blind.

Less than five percent of the million-odd books published each year are made available in formats accessible to the visually impaired, according to the World Blind Union.

They number more than 314 million people, the World Health Organization estimates, and 90 percent of them live in developing countries.

“We have a treaty. It was adopted during the night (of Tuesday to Wednesday) by the main commission of the diplomatic conference,” a source close to the negotiations told AFP.

He said the treaty would be adopted at the plenary session on Thursday, with a formal signing ceremony on Friday.

Francis Gurry, the head of WIPO, confirmed the news, saying it was “a balanced treaty which takes into account the interests of the visually impaired” and of editors, “to protect their rights.”

“We have worked for 30 years to reach this moment,” said Maryanne Diamond, an official with the World Blind Union.

“We are very happy, as are all of the blind and civil society NGOs here,” James Love, the director of the NGO Knowledge Ecology International, said of the provisional agreement in Marrakesh.

“The outcome is a very big victory for persons who are blind, and it will change the lives of millions of persons, in very concrete and meaningful way,” he added.

The exact contents of the treaty remain unknown.

But according to the WIPO, which is a UN organisation, it includes a commitment to permit the cross border exchange of books in formats designed for the visually impaired, such as Braille, the limited circulation of which is often restricted by national laws.

Calls for an international treaty have grown since the adoption in 2006 of the UN Convention on the Rights of Persons with Disabilities, which states that laws protecting intellectual property must not pose a discriminatory or unreasonable barrier limiting access to cultural material.

Blind soul music legend Stevie Wonder has called for a “state of emergency” to be declared, saying the world must “end the information deprivation that continues to keep the visually impaired in the dark.”