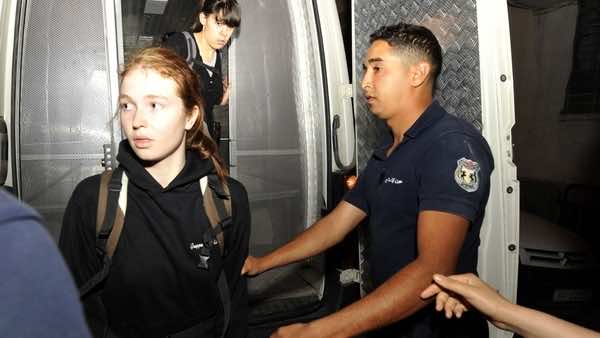 Three European women with feminist protest group Femen arrived in Paris on Thursday after they were freed from a Tunisian jail where they were held for baring their breasts in public.

The three, two Frenchwomen and a German, were released from a prison in northeastern Tunisia on Wednesday after an appeals court suspended their sentences when they apologised for their protest.

Marguerite Stern and Pauline Hillier from France and Josephine Markmann from Germany were detained after staging their bare-breasted protest in Tunis on May 29.

They were sentenced on June 12 to four months in jail for indecency and an attack on public morals over the protest in support of Amina Sboui, a detained Tunisian activist with the same group.

The trio were greeted by the head of the French branch of Femen, Inna Shevchenko, after arriving at Paris’s Orly airport and were whisked away in a taxi without making statements to journalists.

“We welcomed them, we took them in our arms. They seem tired but the important thing is that they are here,” a fellow member of the group, Sarah Constantin, told reporters at the airport.

“We’ve won one battle, but as long as Amina remains in prison, we will continue to fight,” she said.

Sboui was arrested for painting the group’s name on a wall near a cemetery in the central city of Kairouan last month, in protest against a planned gathering of radical Islamists. She risks prison terms of two years and six months respectively for desecrating a cemetery and indecency.

The jailing of the three European activists, on charges of indecency and attacking public morals, were criticised as harsh by international rights groups and European capitals.

“I share the relief of their families,” Vallaud-Belkacem told AFP.

Founded in Ukraine in 2008, Femen is a self-declared “radical feminist” group known for its topless protests against sexual exploitation of women, sexism and religious institutions.