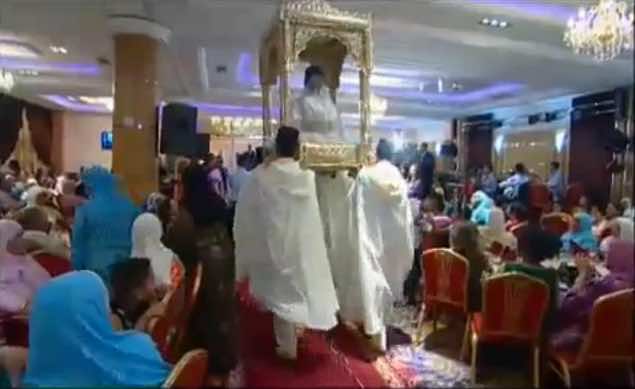 In Tinghir the wedding ceremony used to be celebrated for eight consecutive days. But, nowadays the number of almost any wedding party is reduced to three days. Just some fifteen years ago, as I still remember though still younger by then, the wedding ceremony would last for eight days to the extent that there were guests from other tribes that were relatively far from Tinghir. Yet, because of economic problems and because people no longer like to spend much time on such things, they now celebrat it in just three  days.

In the past, when a man was ready to get married his parents usually used to look for a suitable girl for him. Nowadays, things have positively changed as men can at last opt for the girl they wish instead of another one being imposed on them by their parents.

When the man eventually finds the girl he wants to pass the rest of his life with, he has got just to inform his parents to accompany him to see if she and her family agree. In that day, the man and his parents pay a visit to the girl’s family bringing with them some presents in terms of sticks of sugar and henna. After an introductory conversation between the two families, the man’s parents try to be straightforward. If the girl refuses, the man and his parents just leave her house.

Though the girl refuses, the man and his parents, as a tradition, do not take back the gifts they had brought as a sign that nothing had changed.

If the girl accepts to be engaged to that man, her parents ask her to prepare a cup of tea and bring it to the guests so that they can manage to have a swift, last glance at her face and complexion.

When the two parties reach an agreement, they directly go to the notary’s to make things legal so the newlyweds can ask each other out whenever they please even before marriage.

In the first day of the wedding which is termed “As’hmi,” and earlier in the morning the butcher comes to slaughter a cow or a bull. In the first day, there should be no sign that there is a wedding ceremony in the tribe till the evening when only the neighbors and relatives of the family are invited to dinner.

When guests arrive, after a brief recitation of the holly Quran, they assign a certain person among them to take charge of preparing tea for them. Every now and then during that night, guests are served some small pieces of bread and some barbecues made of the cow or the bull’s liver mixed with some grease.

This type of barbecues is referred to as “Toutliwin.” Having finished with those barbecues, guests finally would be served the main dish of that day which is Couscous with some edible innards of the cow or bull.

When the guests are finished with their meal, they directly go outdoors to play some “Ahidous” (Amazigh music).” In the beginning, they start playing alone and sing a certain song through which they ask the mother of the bride or the groom to call upon some women and girls to come and play with them. The men and women divide into two relatively big lines: a line comprised of women and another of men. Then, they begin to sing songs called “Izlan.”

In the second day of the wedding which is called “Tikfaf” meaning “presents,” inhabitants of the tribe are invited to lunch. As a tradition, preachers are served first as they come to lunch at an early time: between 9:30 and 11 O’clock. They first recite as much Quran as they can manage and this small recitation is called “S’lekt.”

When the preachers are finished with their meal, other men of the tribe come in crowds to lunch in their turn. Before having the main dish, men as usual assign somebody to prepare tea for them. Habitually, the assigned person refuses in the very beginning as sort of modesty but eventually gives in.

In the same day, women also come to lunch at 3:00 O’clock, that is, after men have left. Before having lunch and after drinking some cups of tea, women indulge in playing “Ahidous” but this time without men. Usually, some women volunteer to dance before others when they are asked by either other women or by the bride or groom’s mother. Finally, after playing “Ahidous”, they eat their lunch and leave.

In the night of the same day, men and women come back to have dinner. This time they have their dinner at the same time but not in the same room because the inhabitants of this area are conservatives. But, prior to having dinner at a time in the evening, cars come in successions bringing presents in terms of cases of flour, boxes containing sticks of sugar, rams, blankets, and even music bands, etc. At that time, horns of the cars permeates the entire tribe. Finally, all the guests get in and have dinner before they go outside and play “Ahidous” once again with women. The “Ahidous” often lasts till a late in the night.

In the third and last day of the wedding which is called “Tanaka”, only relatives and guests from the neighboring tribes are invited to lunch and dinner. The traditions that precede and follow each meal are all the time the same.

In the night of that last day, some few members of the groom’s family use their cars to bring the bride to her house. When that group of people, who are called “Issnayen” are near the house of the bride, they start tooting as sign for them to get prepared to bid farewell to their daughter. When the groom’s family gets to the bride’s house, they would be warmly received by her family members and all the other members of her tribe as young boys start to yell and women start to ululate.

The newlyweds’ family and tribe members combine together and play “Ahidous” waiting for the bride and groom to have some photos with their relatives. Then, as many cars picking up the bride’s family and tribe members follow the car picking up the bride in a succession and start launching their cars’ horns on their way till they get to the groom’s house. They start playing “Ahidous” once again while some volunteers from the groom and bride’s families or close friends unload some stuff the bride is often entailed to bring to her new house like blankets, beds, mattresses, carpets, big mirrors, quilts, etc.

When the bed is ready, the bride and groom get into their room and have some privacy. At that moment which is termed “Guit N’tmghra” the groom is required to rid his bride of her virginity forever. Finally, celebrations continue to a late time in the night and some cases till the down.