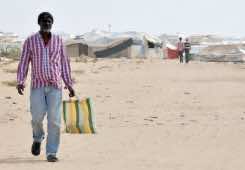 Some 200 people in a camp in southeast Tunisia for those who fled the Libya conflict in 2011 will be evicted Sunday when the UN refugee agency closes it, an NGO said Thursday.

“They are pushing the refugees out of the camp, they are closing it. We condemn the lack of humanitarian aid, the lack of security, the lack of resettlement,” Nicanor Haon, with the Boats 4 People NGO, told a news conference.

Around 700 people, most of them sub-Saharan Africans, are still living in the camp near the Libyan border; 250 are waiting to be resettled in the United States and the same number have been offered accommodation in Tunisian cities, according to the UNHCR.

But the remaining 200 have had their asylum requests rejected and will no longer be the responsibility of the UNHCR when it closes the camp on June 30.

Haon said they risked expulsion, arrest or worse, adding that Tunisia did not have specific laws governing refugees, and that even those under the protection of the UNHCR who are to be resettled within Tunisia have no guarantees for their future.

“It would be very easy to finish this work, we’re only talking about a few hundred people. It’s one of the smallest refugee camps in the world,” he said, adding that all the camp’s residents should be granted refugee status.

Dalia Al Achi, a UNHCR representative, said proposals for work and housing had been made to those still in the camp, but that the agency could no longer support those who did not have refugee status.

“They were turned down in the first instance and again on appeal. (Nevertheless) we allowed them to stay since the end of 2012,” she said.

Tunisia opened its borders to a flood of people — more than 300,000 — fleeing the conflict in Libya that led to the overthrow and death in October 2011 of Moamer Kadhafi.

At the height of the crisis, Choucha hosted around 18,000 refugees.