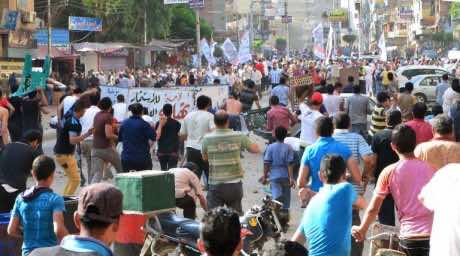 Thousands of anti-government protesters gathered in Cairo’s Tahrir Square on Friday with numbers swelling, as supporters of Egypt’s President Mohamed Morsi held a rival rally on the other side of the capital.

Waving Egyptian flags and chanting “Leave”, the protesters joined hundreds who had camped overnight in Tahrir — the epicentre of the revolt that toppled Hosni Mubarak in 2011 and catapulted Islamist Morsi to the presidency.

Anti-Morsi protests also took place in several parts of Cairo including the neighbourhoods of Shubra, Sayeda Zeinab and Mohandesseen.

Outside the capital, opponents of Morsi took to the streets in second city Alexandria, in the Nile Delta city of Mansura and in the canal city of Port Said.

The protests come ahead of mass anti-Morsi rallies planned for Sunday.

Morsi’s Islamist supporters, who gathered in Cairo’s Nasr City neighbourhood, have vowed to remain on the streets to protect the president’s “legitimacy”, raising fears of violence.