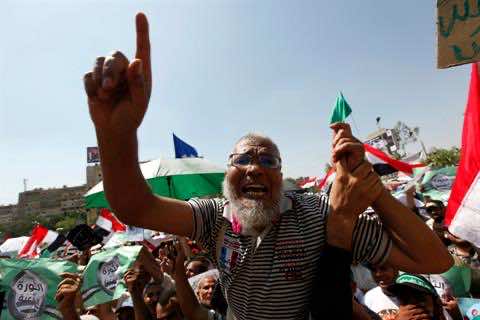 Two offices of the Freedom and Justice Party, the political arm of President Mohamed Morsi’s Muslim Brotherhood, were torched on Friday as rival rallies were held across Egypt.

FJP offices were set alight in the Mediterranean city of Alexandria and in Aga in the Nile Delta province of Daqahliya, security officials said.

Television footage showed plumes of smoke rising from the building in Alexandria as pro- and anti-Morsi protesters clashed.

The offices in Aga were ransacked and then burned, the officials said.

Tens of thousands of Islamist protesters gathered in Cairo’s Nasr City neighbourhood to defend Morsi’s legitimacy, while thousands of his opponents took to the streets in several parts of the country.

The unrest comes ahead of mass protests planned against Morsi on Sunday’s first anniversary of his becoming president.