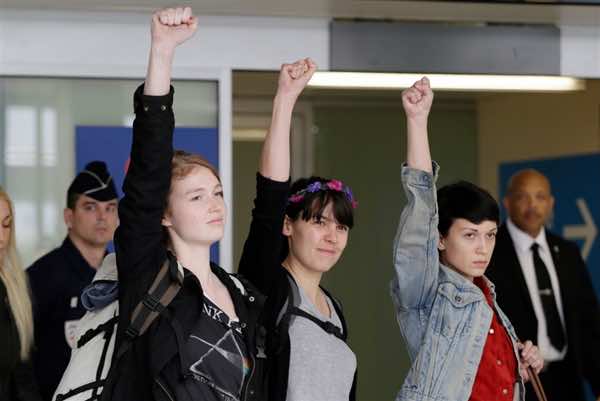 Right after their release from Manouba prison, northeast Tunisia, after a month and half detention, the three Femen activists who were detained for their topless protest in Tunis in support of the Tunisian Femen activist Amina Sboui delivered their version of the conditions of their imprisonment in Manouba.  In a press conference in Paris, the three Femen activists, two French and one German, gave a detailed account of their experience since the day of their detention describing the conditions as ‘hellish’ and picturing Tunisia as a country full of Muslim extremists, shari’a law, intolerance, patriarchy and despotism

Marguerite Stern and Pauline Hillier from France and Josephine Markmann from Germany were sentenced on June 12 to four months in jail for indecency and an attack on public morals over the protest in support of Amina Sboui. After receiving suspended sentences from an appeal court for baring their breasts in public, they were freed from the Tunisian jail Wednesday June 26. In their press conference, the European women started with their regret expressed before the Tunisian court affirming that they did that under pressure and because it was “the last card to play” to get freed and continue their struggle.

“We were cut off from the outside. And in prison, we have experienced significant physical and psychological pressure,” explained Josephine Markmann, 20. “We had no contact whatsoever apart from with our embassies. They advised us to apologize, explaining that this was our last card to play,” added the French activist Hillier Pauline, 26. “We considered that we were not meant to be martyrs, and as free we would be more effective to continue the fight. We regretted, but we did not apologize, FEMEN never apologize,” continued Jospehine Markmann.

In what seems like an Orientalist description shaped to fit the prism of a Western observer, the three women gave the darkest description ever of what they went through in prison. Exaggeration or reality, the prison “abounds with cockroaches, urine, blood spots, and humiliation of all sorts.”

“The detainees are allowed to take a shower once a month and beds are shared by two in a room of 30 detainees.” Marguerite Stern, the third activist, spoke of “religious tyranny” within the prison in that the only book allowed inside the prison is the Qur’an, and all TV programs are religious. What’s striking about Margaret Stern’s intervention is her statement that most of women prisoners are victims of rape or adultery.

While others don’t deny that some Tunisian prisons still lack the basic conditions of decent imprisonment that respects human rights -especially hygiene conditions- they strongly reject the idea that majority of women are imprisoned for committing adultery or after being raped; which implicitly portrays Tunisia as a country of injustice and misogyny.

Mr. Souhaib Bahri, a lawyer who defended the European activists and visited them in Manouba prison, was surprised and angered by the statements they released in the press conference. “When we met them, none of them has reported beatings or insults. We would have known of it had they been beaten,” t Mr. Souhaib Bahri told HuffPost Maghreb.