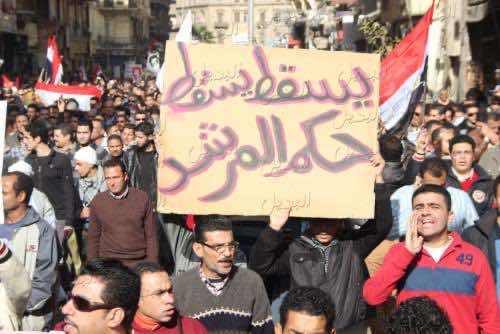 Egypt braced for nationwide protests against Islamist President Mohamed Morsi on Sunday to mark the anniversary of his turbulent maiden year in office after violence at rival demonstrations killed three people, including an American.

Washington warned Americans against travel to Egypt for fear of further violence as antagonism intensifies between Morsi’s Islamist supporters and the mainly secular opposition who accuse him of betraying the 2011 revolution.

Britain urged its citizens to “avoid all demonstrations and large gatherings,” while France calls on its nationals to “limit movements to those strict necessary.”

Morsi’s opponents have called nationwide protests for Sunday to demand that he step down, sparking counter-demonstrations by the Muslim Brotherhood and its Islamist allies that have triggered often bloody clashes.

Rival demonstrators pitched their tents and prepared for the long haul.

Morsi supporters spent the night outside the Rabaa al-Adawiya mosque in Cairo’s Nasr City neighbourhood, where tens of thousands had gathered on Friday to defend the legitimacy of Egypt’s first freely elected president.

In Tahrir Square, opponents have set the stage for what they call a “second revolution”, with dozens of tents pitched and a large stage erected ahead of Sunday’s rallies.

Egyptian newspapers underlined the deep division in the Arab world’s most populous nation, with the independent daily al-Tahrir describing Friday’s rallies as “Egypt against the Brotherhood” and the state-owned daily al-Gomhuria talking of “The Battle of the Squares.”

The American was killed as he took photographs of a demonstration in the Mediterranean coastal city of Alexandria, Egyptian officials said.

State Department spokeswoman Marie Harf, who was travelling in the region with Secretary of State John Kerry, identified the dead man as Andrew Pochter, 21, from Maryland.

“We extend our deepest condolences to his family and friends. We are providing appropriate consular assistance,” she said.

He had been working as an intern at AMIDEAST, an American non-profit organisation.

Another man was killed during earlier clashes in Alexandria.

In the Suez Canal city of Port Said, an Egyptian journalist was killed and several other people injured when someone threw a small explosive device at anti-Morsi protesters, a security official and witnesses said.

Across the country more than 130 people were wounded, security officials said.

The offices of the Freedom and Justice Party (FJP), the political arm of the Muslim Brotherhood, were torched in Alexandria and at Aga in Daqahliya, and its offices were stormed in Beheira.

Morsi, 62, stands accused by his critics of failing the 2011 revolution that brought him to power and of ignoring nearly half of the electorate of around 50 million who did not vote for him last year.

Sunday’s protests have been called by Tamarod (Arabic for Rebellion), a grassroots movement which says it has more than 15 million signatures for a petition demanding Morsi’s resignation and a snap election.

Friday’s pro-Morsi demonstrations were seen as a preemptive strike by the president’s supporters against what they see as an attempt to subvert Egypt’s fledgling democracy.

“We will not allow a coup against the president,” senior Brotherhood leader Mohamed al-Beltagui told tens of thousands of Morsi supporters who rallied in the capital.

Anti-Morsi protesters joined hundreds camped overnight in Cairo’s iconic Tahrir Square, epicentre of the 2011 revolt that toppled Hosni Mubarak and catapulted the Islamist to the presidency.

“We urge all parties to refrain from violence and express their views peacefully,” US State Department spokesman Patrick Ventrell said.

“And political leaders have the responsibility of taking steps to ensure that groups do not resort to violence.”

Morsi warned in a televised speech on Wednesday that the growing polarisation threatened to “paralyse” Egypt, and appealed to the opposition to join talks.

On Thursday however, the opposition National Salvation Front coalition rejected his offer and renewed its call for a snap presidential election.

The State Department warned Americans “to defer non-essential travel to Egypt at this time due to the continuing possibility of political and social unrest.”

“US citizens are urged to remain alert to local security developments and to be vigilant regarding their personal security,” it added in an updated travel warning.

Malaysia too warned its nationals to postpone travel to Egypt.

Amnesty International called on the authorities to ensure the security forces showed restraint and protected peaceful demonstrators from violence over the weekend.

At least four other people have died since Wednesday in clashes in the Nile Delta — three in Mansura city and one in Zagazig, medics said.

Egypt is deeply split between Morsi’s Islamist allies and an opposition of leftists, liberals, Christians and some Muslim groups.

The army, which oversaw the transition from Mubarak’s autocratic rule but has been on the sidelines since Morsi’s election, has warned it will intervene in the event of major unrest.