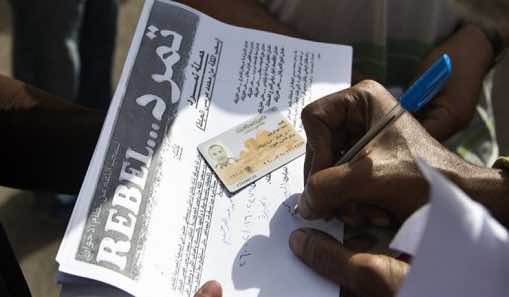 More than 22 million people have signed a petition in Egypt demanding the departure of Islamist President Mohamed Morsi and a snap election, the opposition Tamarod (Arabic for rebellion) group said on Saturday.

“Our petition has gathered 22,134,465 signatures,” Tamarod spokesman Mahmud Badr told journalists on the eve of Sunday’s first anniversary of Morsi’s inauguration when it has called for nationwide protests.

This figure is higher than the number of people who voted for Morsi in last year’s presidential election — 13.23 million, or 51.7 percent of the ballots cast.

Previously, Tamarod said 15 million people in Egypt had signed the petition demanding that the president step aside.

Morsi supporters have dismissed the petition as invalid, insisting that only elections can decide whether a head of state stays or goes. His term of office is due to end in 2016.

The country was bracing on Saturday for the protests marking the first anniversary of Morsi’s term in office amid violence in which several people have been killed, including a young American.

Opposition protests have sparked counter-demonstrations by the Muslim Brotherhood and its Islamist allies that have triggered often bloody clashes across the country.

Morsi, 62, stands accused by his critics of failing the 2011 revolution that brought him to power and of ignoring nearly half of the electorate of around 50 million who did not vote for him last year.