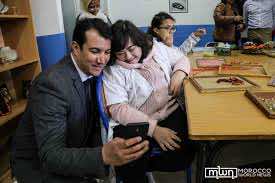 Chicago – A person on a wheel chair is waiting at the bus stop. As usual, university bus is on time, unlike buses and trains somewhere else which are unusually late and very uncomfortable. The bus comes to a halt. The bus driver opens the door and greets students, who are queuing, with a smile.

I tried not to blink to watch this scene which during my first days in USA, particularly at Southern Illinois University Edwardsville, was interesting; later, it became common. The bus driver, unbuckled his seatbelt, got off the bus to provide assistance to a person on a wheel chair. No one got on the bus until the wheel chaired person was securely seated in a private space equipped to serve such cases.

I watched the scene with amazement as the bus driver got wet, since it was raining that day. Still, he was smiling as I and the other students were getting on the bus to go back to Cougar Village, students’ residential area, after a long productive day.

“Have a good night,” the bus driver would say as you get off the bus and a “thank you/ you too” response from students would end this daily exchange greeting between bus drivers and students whenever you use the bus. I went home, switched on my lap top and opened a word document just to jot down a phrase that kept echoing in my mind months later before I decided to write something about it.

“People with special needs” was the only phrase and idea that suffered loneliness -not indifference- on my desktop until I finally decided to reflect on it with a rich timeline of events and scenes that have dwelled in my mind ever since I stepped on the land of human consideration and dignity which some people criticize for the sake of criticism.

Nowadays, it has become widely known that “people with special needs” refers to people who need help and assistance because of some disabilities that may be psychological, physical, or mental. People in developed countries have gone far in this regard and have provided necessary facilities to make people’s life easy.

These measures and procedures have made people special and special people at the service of people with special needs. With this in mind, I have always sought a gleam of hope not only in our representatives in the parliament, but also in those who consider themselves citizens, if not good citizens of the kingdom of Morocco.

“People with special needs” does not necessarily refer to physically handicapped people, such as wheel chaired people. People with special needs are those who adopt “cheating” as their motto to pass exams and later ask for good job positions. They are people who attack their teachers in schools and chase them after exams in the street. They are teachers who smoke in schools and classrooms; teachers who bully their kids and insult them with the most disgusting, disrespectful, degenerating, inhuman and callous words.

They are people who have turned schools from a sacred to profane spaces.  They are neighbors who disturb each other at night and make apartments a hell rather than places for rest and comfort. They are people who throw trash everywhere else other than their houses and complain about their neighborhoods being polluted. They are parents who scold their children for lying while they are lying themselves.

They are people who were born Muslims without understanding what a religion is, let alone Islam. They are also people who cannot distinguish love from whim, a friend from an acquaintance or a colleague. They are those who swear they cannot live without you, still they backbite and cheat on you. They are those who are fooled by some misleading media and those who foolishly believe that “ignorance is strength”, as George Orwell said years ago.

The development and prosperity of Morocco lie on all of us. Morocco, then, needs more than ever any time before its special people with “special” skills, good citizenship, honesty, citizens who assume responsibility, shared responsibility, a government that values human resources and an opposition that contributes to the prosperity of the nation, not a heterogeneous opposition that strives to destroy every hope and attempt to reform.

“To live the present, benefit from the past and plan for the future” is a statement that echoes in my mind whenever I think about what is going on in Morocco. We should remember, as successors of ancestors who died and sacrificed their lives for our freedom and independence, that citizenship entails determination and action, not carelessness and complaint.

Development starts from what we can do first and foremost for ourselves not from what our country can do for us.  The call for change of mentality, attitudes and perspectives is irreversible if we want to be part of sustainable development. In fact, change is a process that needs a lot of perseverance, altruism, action, and hope.