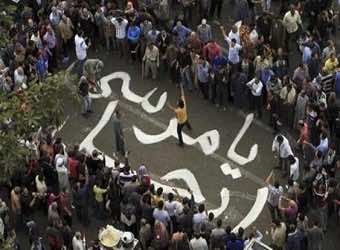 A group of secular-leaning deputies resigned on Saturday from Egypt’s acting parliament in support of the people, they said, on the eve of mass rallies planned against Islamist President Mohamed Morsi.

Several others had tendered their resignations but they are yet to be accepted, upper house speaker Ahmed Fahmy said in a statement.

The resignations come as Egypt is deeply divided between Morsi’s mainly Islamist supporters and a broad-based opposition.

The president is accused of betraying the 2011 revolution that brought him to power, concentrating power in the hands of Islamists and failing to manage the country’s affairs.

“We gave them a chance to lead a reconciliation but they didn’t. The resignation comes to support the popular trend in Egypt,” said outgoing deputy Mona Makram Ebeid.

Ihab al-Kharatt, who heads the human rights council at the Shura Council, said at least 22 deputies had quit.

“We resigned in support of 22 million Egyptians who withdrew their confidence from Morsi,” Kharatt told AFP.

He was referring to a petition launched by grassroots movement Tamarod (Arabic for Rebellion) which says it collected 22 million signatures to demand Morsi’s departure and a snap presidential election.

This figure is higher than the number of people who voted for Morsi in last year’s presidential election — 13.23 million, or 51.7 percent of the ballots cast.

Morsi supporters have dismissed the petition as invalid, insisting only elections can decide whether a head of state stays or goes. His term of office is due to end in 2016.