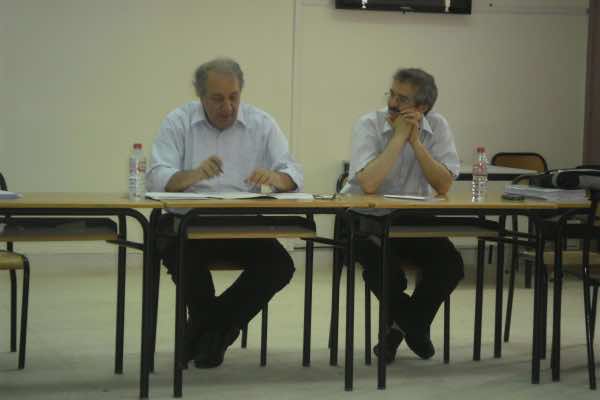 Moroccan Cultural Studies Center in Fez hosted the distinguished thinker and cultural historian, professor Nabil Matar, for the second time on Thursday, June 27. Dr. Nabil Matar specializes in seventeenth-century English literature, Arabic and European travel in the Mediterranean, captivity literature, early modern Euro-Islamic contacts and Arab-Islamic civilization. Many of his publications center on Moroccan history, and Morocco’s diplomatic relations with European countries, particularly France and England. His talk at the University of Fez, which was entitled Abullah Ibn Aicha in the Court of France, uncovered interesting facts about Morocco’s relation with France during the reign of the Sultan Moulay Ismail (1645 -1727).

Abdallah Ibn Aicha was a Moroccan Admiral Ambassador to France in the seventeenth century. He set out for his mission on November 11, 1698, in order to negotiate a treaty to obtain an agreement to prevent the capture of Muslims by French ships, and to obtain the return of captured Muslim slaves employed on French galleys. The treaty was also meant to facilitate bilateral trade between Morocco and France and open mutual tolerance, peace and understanding. But Abdallah Ibn Aicha’s diplomatic mission would be to no avail as the treaty eventually failed.

When Abdallah Ibn Aicha arrived in Paris, he was warmly welcomed by French officials and visited many landmarks by which he was deeply fascinated, such as the Palace of Versailles. The warmth he received in Paris made him fell in mahaba (affection) with all those who showed kindness to him, especially Louis Jourdan and Jean-Baptiste Estelle. The relationship with these two men would continue even after the treaty failed and Abdallah Ibn Aicha would never stop sending them letters that express the mahaba he harbors for them in the most refined and sublime terms.

Nabil Matar’s reading of this relationship between Ibn Aicha and French officials shows to what extent the political thought of Ibn Aicha was incapable and immature. He attributes the failure of the treaty to the Moroccan diplomat –not to the French – for several reasons. He argues that cultural misunderstanding was one of the main factors that led to the failure of the treaty. Ibn Aicha didn’t differentiate between friendship and business and this mixture led to a major cross-cultural misunderstanding. In many occasions, Ibn Aicha called Louis Jourdan a brother, a treasure etc, and seemed willing to sacrifice anything (even his countries interests), but not his friendship with the French.

The second factor that led to the failure of the treaty, according to Nabil Matar, was diplomatic unpreparedness. It was known that Ibn Aicha mastered Spanish and English (because he was formerly a slave in England), but he didn’t speak French. When he traveled to France to make this treaty he didn’t take a reliable Moroccan translator but relied on a French translator,Delacroix. When the treaty failed, Ibn Aicha suspected the translator and accused him of not doing his job properly, while, in fact, Delacroix was doing his best.

The third reason behind the failure of the treaty was what Nabil Matar calls the absence of public responsibility. At the time when the French were negotiating to protect food security in their country, especially with plague and famine striking the neighboring countries, the Moroccan ambassador was trying to get consumer goods and things for his personal use or for his children. In a letter to J-B Estelle he writes:

When I returned from my journey, I left him (Jourdan) a few matters to handle for me. He was willing to do so. […] The first was the carpet that I stopped to look at many times while you were with me. There were also other rare objects that I designated, each by its name, and he told me about his ship in India, that when it returned, he would send me what was suitable[1].

The deal was toys, mirrors, carpets, tea and other particles and articles in return of huge amounts of wheat and natural and mineral substances. When Ibn Aicha described everything he saw in France to Moulay Ismail, the latter got infatuated with the Palace of Versailles and he wanted one at home in Meknes. Moulay Ismail asked France to send him three technicians who would help in designing and building a similar landmark but the technicians refused to come to Morocco. So, his interest in personal things, instead of pushing for strategic agreements that would benefit the whole country, was described by Nabil Matar as a lack of public responsibility.

The fourth reason Nabil Matar indicated was the lack of familiarity with foreign issues and what was going on the world. This reason made Morocco’s diplomacy remarkably weak and self-centered at a time when it had to open on and benefit from other experiences in the world.

As Edmund Burke said, “those who don’t know history are destined to repeat it” and, as many commentators on Nabil Matar’s presentation said, Morocco’s diplomacy up to the present day repeats the same mistakes and maintains the same asymmetrical relationship with France. The four reasons behind the failure of the treaty between Morocco and France in the seventeenth century are, somehow, the reasons behind many economic and cultural problems Moroccans suffer nowadays. Therefore, the story of Ibn Aicha is a lesson that every Moroccan should learn.

[1] Nabil Matar, In the Land of the Christians: Arabic Travel Writing in the Seventeenth Century (New York:Routledge, 2003), p.210.