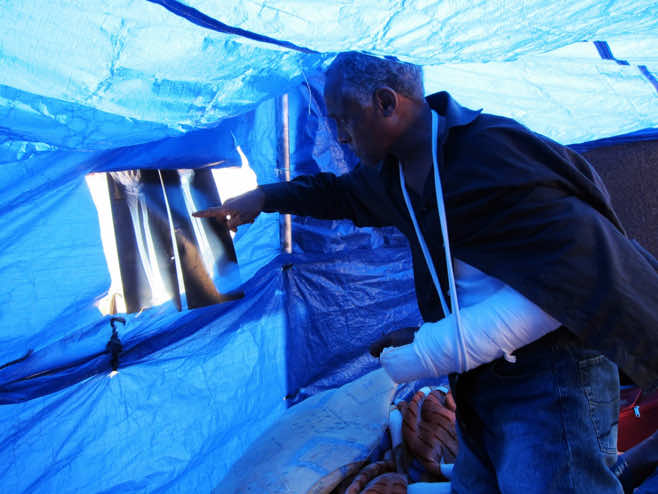 Several hundred people who had fled the 2011 Libya conflict refused Sunday to leave the Choucha refugee camp in southern Tunisia, which was due to be shut, blocking attempts to dismantle their tents, an AFP journalist reported.

The UN’s refugee agency UNHCR said in March that it would close the camp on Sunday. Choucha opened in early 2011 to shelter those fleeing the conflict that toppled Libya’s former dictator Moamer Kadhafi.

Water and electricity supplies to the camp have been cut, but its remaining residents, mostly sub-Saharan Africans, are blocking any attempts to take their tents down, the AFP journalist reported.

Mohammed Taher, a 33-year-old Sudanese resident of the camp, said he was determined to stay in Choucha in spite of its closure.

“We refuse to leave, and even if the Tunisian authorities are going to take down our tents, we will sleep under the stars,” he said.

He said the Tunisian government had made lots of promises to the refugees at Choucha which it had not kept.

Khaled Moujib, a Palestinian living in Choucha, also charged that the government was doing little to help their situation.

“We are being held hostage by the Tunisian authorities, who refuse to legalise our situation,” he said.

“We do not want to be integrated into a Tunisia that does not have a law to protect refugees,” he added.

Paul Constant, 39, from Ivory Coast said he would leave the camp immediately if he was offered residency in Tunisia.

UNHCR officials were absent from the site on Sunday, while security was boosted, the AFP journalist said.

Around 700 people are still living in the camp near the Libyan border, of which 250 are waiting to be resettled in the United States, while an equal number have been offered accommodations in Tunisian cities, according to the UNHCR.

But some of the refugees who have been offered accommodations in Tunisia have staged protests in recent months to demand their resettlement in the west. They have said that there is a lack of legislation on asylum seekers in Tunisia, and that they are victims of discrimination in the country.

A dozen refugees had gone on hunger strike, while others camped out in front of the UNHCR headquarters in Tunis and the southern town of Zarzis.

Tunisia opened its borders to a flood of people — more than 300,000 — fleeing the conflict in Libya that led to the overthrow and death in October 011 of Kadhafi.

At the height of the crisis, Choucha hosted around 18,000 refugees.