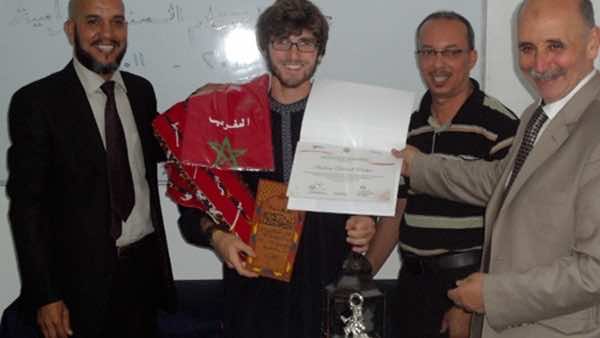 The United States national Andrew Pochter, 21, who was lately killed during the protests in the Egyptian city of Alexandria, had studied Arabic in Al-Jadida, Morocco between June 2010 and June 2011. Andrew Pochter studied in Morocco as part of the U.S. National Security Language Initiative for Youth (NSLI-Y) funded by the Department of State to study in Morocco.

Doomed almost to the same destiny of Chris Stevens, the United States Ambassador who studied and volunteered in Morocco and  was killed in Benghazi, Libya, Andrew Pochter was stabbed to death during anti-government protests in Egypt on June 28.

The curious, ambitious and idealist young man was also very sociable and easy-going as his teachers and acquaintances in Al-Jadida, Morocco told Alarabiya News.

“He loved common folks, socializing and simple life” said Hachimi Taoufik, a teacher who taught Arabic to Pochter in Morocco.

“I believe he was the only student among his group who was the most social; he loved to go buy sardine sandwiches in Mellah, that cost 5 dirhams (60 cents), he loved to come home and cook with my wife and kids, he even liked to go grocery shopping to cook some of the meals he wanted to share with us,” Hachimi Toufik added.

During his one-year stay in Morocco during the hey-day of Moroccan social uprisings led by the 20th  February movement, Andrew Pochter was very curious to know what was going on and acquired a deep insight into Morocco’s political, social and economic status. He even wrote to Al-Arabiya News on the eruption of protests in Morocco giving an anthropological reading of the events based on his daily contacts with his host family, friends and people.

“My Moroccan host family represents a prime example of the kind of change I have noticed among the middle class. My surrogate parents, being teachers, for the most part have been satisfied with their jobs, livelihood, and finances,” he wrote. “They were previously apolitical and avoided community involvement outside of their normal sectors, [but their] approach to life came to an apparent crossroads with the February 20th protests, the date of the first nation-wide rally,” Andrew Pochter wrote.