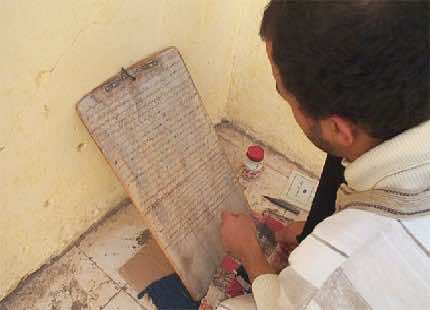 Being a five-year-old child, my family, as any other Moroccan family, sent me to the Jamaa (traditional kindergarten, especially in villages) to learn the Arabic alphabets and some short chapters from the Holly Qur’an before I officially enrolled in “the modern school.” Usually in mornings, my mother would escort me and ask the Fkih to whip me whenever I showed any sign of idleness or misbehavior – He would do without waiting for anyone to give him the green-light.

In other times, my peers and I would bang at each other’s door and go together. You could recognize some of us coming to the Jamaa without faces being washed, or with partially-torn wet clothes that reeked of the smell of urine as effects of night dreams. Nevertheless, on our way, we would retrieve previous memorized verses chorally, sway, jump, and kick any rubbish we found in the street, or fight with our wooden slates. With our innocent souls we enlivened and invigorated the alleys with our shrieking voices in the early morning.

At the gate of the Jamaa, we would wait for that long-bearded man to show up, and if he was already there, we would stand in a solemn salute becoming to the meaning of being under the supervision of that firm Fkih. We kissed his hand one by one and sat down. In turn, he would say “llah ifteh alik” (May Allah help you). After this short grin on his face as a sign of kindness, he would extend his hand to that long stick he always put in a recess beside him for urgent cases. Instantly, everyone would dash and pick out his wooden slate and start memorizing as if a referee whistled for a match to start

I was one of the Fkih’s favorite pupils. I could easily memorize and clean my slate to embark on another short Surah. The Fkih envisaged me to be a skilled Fkih and reciter of the holly Qur’an. He was always pleased to point to me to recite before people whenever we met in any banquet or party.  But everything would be up-side-down later.

One day, we were asked by the Fkih to bring five Dirhams-it was the end of the month in which he used to collect his salary. When I came back home, I urged my mother to give me five Dirhams. I begged my father many times, and they kept saying to me “tell the Fkih to wait until the weekly market and we will give him five Dirhams.” But to their rigidity, I was so stubborn; I prolonged my protest if they didn’t give five dirhams, I would not step into that Jamaa. Finally, my mother borrowed five Dirhams and gave it to me. “Oh! Yes” I jumped in full excitement!

I was the first one to bring the five Dirhams. I was so honored for that. I considered it as a remarkable achievement. Afterwards, I recognized that the other pupils refrained from bringing the humble sum. As a corollary, I regretted giving the five Dirhams. I felt injured. Then, I circulated the idea in my tiny head and managed to fabricate a lie to get back my money.

At the end of the session, I went to the Fkih in his nook where he used to sit and settle on his worn-out fleece. I told him that my father recommended me to fetch the 5 DH. The Fkih seemed surprised, but he could easily detect that I was lying. He stretched his hand to his Djellaba pocket as if he were going to pick out the coin. To my dismay, he gave me an unforgettable stormy slap on my face. Being slapped vehemently, I could see a series of copies from everything…Everything was blurred before my eyes. When I turned to go back to my seat, I totally forgot where I had sat before.

From that day on, I was touchy; raising anything beside me would give me the impression that I’m about to receive another strong slap. Worse still, that Jamaa turned to be a nightmare that haunted me every now and then. I was no longer seeing that Fkih as a teacher; but rather, I was always depicting him in my mind as a big slap. Whenever I got to the gate of the Jamaa, my body would shake as I had to kiss his spade-like hand. I was praying those days to be last days to leave and join “the Modern school.”