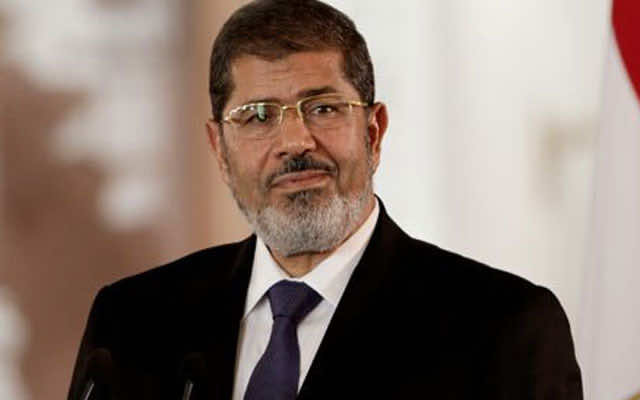 “We give Mohamed Morsi until 5:00 pm (1500 GMT) on Tuesday July 2 to leave power, allowing state institutions to prepare for early presidential elections,” the Tamarod movement said in a statement on its website.

Otherwise, “Tuesday, 5:00 pm will be the beginning of a complete civil disobedience campaign.”

Tamarod — Arabic for Rebellion — is a grassroots campaign which says it collected more than 22 million signatures declaring a lack of confidence in Morsi.

It was behind Sunday’s protests that saw millions of people take to the streets demanding his departure on the first anniversary of his inauguration as president.

As Morsi stood firm and insisted the only way out of the political crisis was dialogue, calls for army intervention increased.

Tamarod’s statement urged state institutions to stand side by side with the protesters.

It urged “the army, the police and the judiciary to clearly side with the popular will as represented by the crowds”.

“The armed forces must act, because they have always been on the side of the people” which “has expressed its will”, said Sabbahi, who came third in the 2012 presidential election.

The best outcome would be for Morsi to go willingly, he added.  But Morsi’s spokesman Ehab Fahmy told reporters: “Dialogue is the only way through which we can reach an understanding… The presidency is open to a real and serious national dialogue.”

Five people were killed when in clashes late on Sunday and another person died overnight from injuries, a health ministry official said.

Some protesters attacked the Cairo headquarters of the Muslim Brotherhood, from which Morsi hails.

Brotherhood supporters fired buckshot in a bid to repel the attackers, an AFP journalist said. Later, automatic weapons fire was heard around the building.

Hundreds of demonstrators spent the night in Cairo’s iconic protest site Tahrir Square and outside the presidential palace, after the army estimated that millions had heeded the opposition call to protest.

Sunday’s turnout — on the first anniversary of Morsi’s inauguration — was described as the largest ever protest in the country’s history.

Anti-Morsi protests were held in the coastal city of Alexandria, the Nile Delta cities of Mansura, Menuf, Tanta and Mahalla, the canal cities of Suez and Port Said and in the president’s hometown of Zagazig.

“The people want the ouster of the regime,” they chanted, echoing the signature slogan of the 2011 revolt that ousted Hosni Mubarak and eventually brought Morsi to power.

His supporters have staged counter rallies to defend his legitimacy and there had been fears of major confrontations.

But Sunday’s anti-government protests eclipsed the loyalists’ gathering in Cairo’s Nasr City neighbourhood, which the army estimated attracted some 25,000 people.

Hospitals also went on high alert as banks and most offices closed on Sunday, a working day in Egypt.

Last week, eight people including an American were killed and scores were injured as rival demonstrators clashed.

His opponents accuse him of betraying the revolution by concentrating power in Islamist hands and of sending the economy into freefall.

Any attempt to remove him would be a coup against democracy, they say.  Opponents insist calls for his resignation are aimed at restoring the revolution’s cornerstones of democracy, freedom and social justice.

The army, which led a tumultuous transition after Mubarak, had warned it would intervene if there was major unrest.

Since taking office, Morsi has battled with the judiciary, the media and the police.