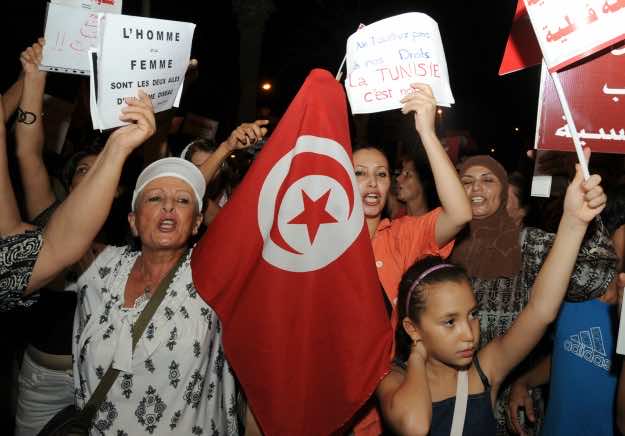 Tunisia’s National Assembly on Monday began debating for the first time the draft constitution, which has been criticised by opponents of the Islamist-led government and took far longer to promulgate than originally planned.

The North African country’s political stability remains fragile, two and a half years after the revolution that ousted former strongman Zine El Abidine Ben Ali in January 2011, adding urgency to the need for the new text.

But the debate, which began at around 1000 GMT, was suspended after less than half an hour when the presentation by the head of the drafting committee, Islamist MP Habib Kheder, was interrupted by the shouts of opposition MPs who accuse him of introducing controversial articles in a discretionary manner.

Those articles exempt laws adopted under the ruling Islamist party Ennahda — which won legislative elections in October 2011 — from constitutional control for three years.

They would also extend indefinitely the legislative powers of the National Assembly and fail to draw up an electoral calendar to replace it with a permanent parliament.

The session was not expected to resume before 1500 GMT.

A handful of secular opposition MPs on Monday issued a statement criticising the “fraudulent process that has affected the works of the constituent committees.”

And several hundred people protested against the draft constitution outside the National Assembly, which has been repeatedly criticised for its inefficiency and the non-attendance of members.

A number of NGOs have also raised concerns about the insufficient human rights guarantees contained in the text.

Amnesty International said it undermined the principles of international human rights law by giving greater legal value to the constitution than to international treaties ratified by Tunis.

But a relatively wide consensus appears to have been forged on the division of executive powers between the president and the prime minister, which was at the centre of a major political tussle.

Ennahda had previously insisted on a pure parliamentary system before allowing the head of state to retain important powers, notably in the areas of defence and diplomacy, and the Islamists also agreed to abandon having the Koran inscribed as a source of law.

Speaking on Monday before he was forced to suspend the session, assembly speaker Mustapha Ben Jaafar, who heads Ennahda’s secular ally Ettakatol, outlined his party’s priorities.

“We wanted to build a constitution on solid bases, guaranteeing freedoms, human rights and the rights of women,” adding that the draft text “does not represent one specific party… but is a constitution for all Tunisians”.

Monday’s debate was to offer every member of parliament the chance to express an opinion on the text, before fixing a calendar for its adoption, where it requires the assembly’s approval by a two-thirds majority, failing which it must be put to a referendum.

The ruling coalition, made up of Ennahda, Ettakatol and the Congress for the Republic, another secular centre-left party, has promised to seek support for the draft constitution from opposition groups.

The main political parties were originally given a year to draft the text after the first post-revolution elections in October 2011, but the timetable was repeatedly revised amid disagreement about the nature of Tunisia’s future political system.

The new constitution must be adopted before a calendar can be drawn up for fresh elections which Prime Minister Ali Larayedh has promised to hold before the end of 2013.

Observers say that with no electoral law or body charged with organising elections yet in place, it is unlikely that parliamentary polls will be held this year.

Adopting the new constitution is seen as key to restoring stability in Tunisia and helping overcome the political crises, social unrest and violent attacks by radical Islamist groups that have rocked the country since the revolution.

“We must work together to put an end to this transitional phase by organising elections as soon as possible and in the best possible circumstances.”