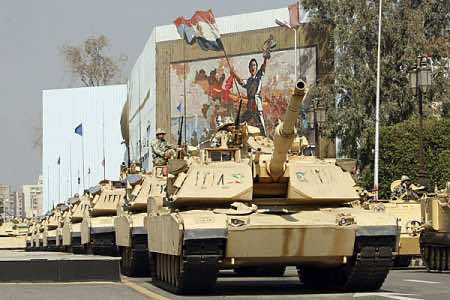 Egypt’s armed forces, pressed by the opposition to help push Islamist President Mohamed Morsi out of power, could arbitrate in the country’s crisis, but exactly how it might act is still unclear, analysts said.

Defence Minister and armed forces chief General Abdel Fattah al-Sisi, who said last week the military would intervene if unrest broke out in Egypt, has become a key figure.

The Tamarod (Arabic for rebellion) movement, which is behind the current protests against Morsi, called on “the army, the police and the judiciary to clearly side with the popular will as represented by the crowds”.

“Egyptians trust the armed forces,” Sabbahi said, recalling that Sisi had said he would respect the people’s will.

“The people… are waiting for General Sisi to keep his word,” he added.

Last week, Sisi warned “the armed forces have the obligation to intervene to stop Egypt from plunging into a dark tunnel of conflict and infighting”.

He added that “it is the national and moral duty of the army to intervene… to prevent sectarian strife or the collapse of state institutions”.

But the army chief has refrained from backing either the president or his opponents in the standoff, or elaborating on what form military intervention might take.

The opposition hailed his statements, but the president’s office was quick to deny any split between Morsi and his defence minister.

Presidential spokesman Ehab Fahmy said “any decision concerning the army is taken in coordination with the president, who is still its commander in chief” under the constitution.

In a veiled warning to the army, Fahmy stressed there was “no political role for the army”.

How the military might act in the coming days is far from clear, Hassan Nafaa, political scientist at the University of Cairo, said.

“The army cannot intervene directly unless there are heavy clashes and a serious threat to the stability of the country,” he said.

If it intervenes by taking power, as it did after the fall of president Hosni Mubarak in 2011, “it might not want to stay (in power) for too long, but for just enough time to prepare an end to the crisis,” he said.

Another option for the military could be to act as guarantor in a “national dialogue” to find a way out of the deadlock, Nafaa suggested.

But Tarek al-Hariri, columnist for the daily Al-Tahrir, said that the paralysis of the country “may lead the army to intervene to ensure that institutions work again, or to push authorities to respond to the people’s demands”.

Hariri said if violence and chaos “reached the point of no return,” the armed forces could “step in to bring an end to the civil conflict”.

Keen to be seen as guarantors of stability, some officers, however, admit that they still have bad memories of the period between Mubarak’s fall and Morsi’s election nearly one and a half years later when they ran the country.

At the time, the same opposition leaders who are today appealing to the military were highly critical of the ruling Supreme Council of the Armed Forces.

They accused the SCAF of continuing authoritarian rule and of carrying out human rights violations.

When Morsi sidelined the powerful head of the SCAF and then-defence minister Field Marshal Hussein Tantawi in August 2012, the move was widely welcomed.

The replacement of the septuagenarian officer, who was close to Mubarak and a veteran of the Arab-Israeli wars, by an officer 20 years his junior, marked a change of both generations and outlook in Egypt’s top brass.

In recent months, the extent of Sisi’s loyalty to Morsi has been the subject of intense speculation.

Originally presented as compatible with Egypt’s Islamist-led government, Sisi is seen today as critical of the president, and someone who is keen to preserve the image of the military.