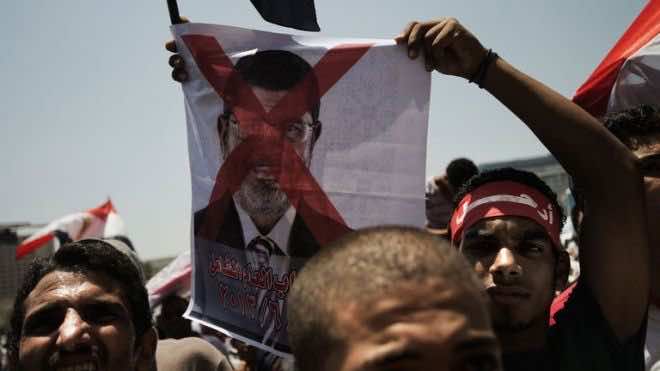 Key developments in Egypt since Islamist President Mohamed Morsi took the oath one year ago.

– 5: Gunmen kill 16 guards near the border with Israel.

– 12: Morsi scraps a constitutional document which handed sweeping powers to the military and ousts Field Marshal Hussein Tantawi who was head of state after Hosni Mubarak’s fall in February, 2011.

– 15 and 22: 64 percent of voters in a two-round referendum back the new constitution, in a vote marred by low turnout.

– 24: Violence between demonstrators and police on the eve of the second anniversary of the uprising that overthrew Mubarak. Nearly 60 people die in a week.

– 7: Morsi carries out a cabinet reshuffle which falls short of opposition demands.

– 16: Gunmen kidnap three policemen and four soldiers in the Sinai Peninsula. They are freed on May 22.

– 2: Egypt’s highest court invalidates the Islamist-dominated Senate, which assumed a legislative role when parliament was dissolved, and a panel that drafted the constitution. The presidency says the Senate will maintain its powers until a new lower house is elected.

– 4: 43 Egyptian and foreign NGO employees given jail sentences ranging from one to five years for working illegally, causing international outrage.

– 21: Tens of thousands of Islamists gather ahead of planned opposition protests.

– 28: The US says non-essential embassy staff can leave after an American is killed during protests.

– 29:  The Tamarod (“rebellion”) campaign which called rallies for June 30 says more than 22 million have signed a petition demanding Morsi’s resignation and a snap election.

– 30: Tens of thousands of Egyptians take to the streets nationwide determined to oust Morsi on the anniversary of his turbulent first year in power.

The health ministry says at least 16 people die in protests across the country.

– 1: The opposition gives Morsi a day to quit or face civil disobedience.The Tamarod calls on “the army, the police and the judiciary to clearly side with the popular will as represented by the crowds”.

Egypt’s armed forces warn that it will intervene if the people’s demands are not met within 48 hours.