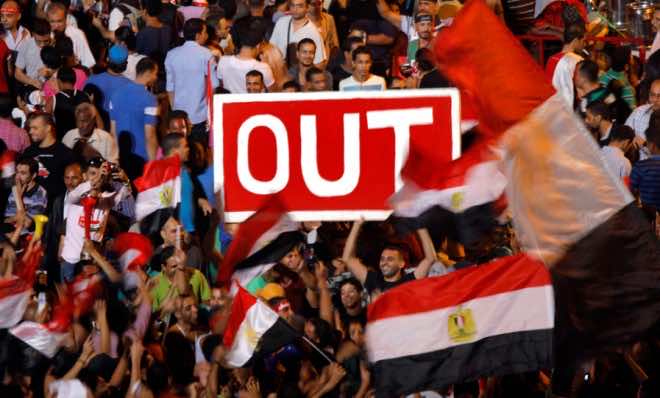 Egyptian newspapers predicted Wednesday would be the day of President Mohamed Morsi’s departure despite the Islamist leader’s refusal to step down as an army deadline loomed.

“The End,” declared the independent daily Al-Watan, in headlines echoed by most other government-owned or independent papers.

In a speech televised early Wednesday, Morsi vowed to stay on as Egypt’s first democratically elected president and said the only alternative to his legitimacy was bloodshed.

His defiant remarks came hours before the expiry of a deadline set by the army calling on Morsi to find a solution to the crisis or face an imposed army roadmap.

“Egypt will be back within hours,” read the independent daily Al-Masry al-Youm, while Al-Shorouk talked of “the disintegration of the Brotherhood state” in reference to the powerful Islamist movement from which Morsi hails.

Egypt is divided between Morsi’s Islamist supporters and a broad-based opposition which took to the streets in their millions on Sunday calling on him to go.

Since coming to power a year ago, Morsi has battled with the judiciary, the media and the police.

On Tuesday, he was further isolated after his foreign minister led a string of cabinet resignations. The spokesmen for the presidency and the cabinet also resigned.

Morsi’s speech sparked deadly violence in Cairo in which 16 people were killed and at least 200 wounded, as fears mounted of more unrest.