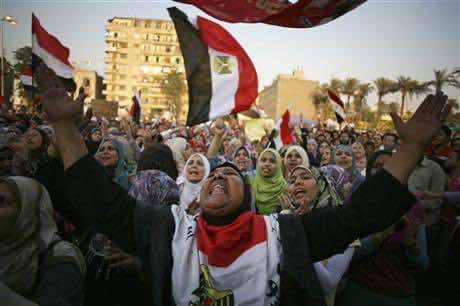 “Mobs sexually assaulted and in some cases raped at least 91 women in  Tahrir Square… amid a climate of impunity,” HRW, which is based in New York,  said in a statement.

It cited figures from the Egyptian Operation Anti-Sexual  Harassment/Assault, which runs a hotline for victims of sexual assault, showing  that there were 46 such attacks against women on Sunday, 17 on Monday and 23 on  Tuesday.

Another women’s rights group, Nazra for Feminist Studies, reported that  there were another five attacks on Friday, said HRW.

The watchdog called on Egyptian officials and political leaders “across the  spectrum to condemn and take immediate steps to address the horrific levels of  sexual violence” in the iconic square.

“The rampant sexual attacks during the Tahrir Square protests highlight the  failure of the government and all political parties to face up to the violence  that women in Egypt experience on a daily basis in public spaces,” said Joe  Stork, HRW’s deputy Middle East director.

“These are serious crimes that are holding women back from participating  fully in the public life of Egypt at a critical point in the country’s  development.”

Several women required surgical intervention after the attacks, some were “beaten with metal chains, sticks, and chairs, and attacked with knives,” HRW  said.

The government response has been to “downplay the extent of the problem or  to seek to address it through legislative reform alone,” whereas what is needed  is for attackers to be brought to justice, HRW said.

Some say the attacks are staged by thugs who are abusing a security vacuum  and confident of escaping prosecution.

Others say the assaults are organised to scare women off from joining  protests and to stain the image of the anti-government demonstrations.